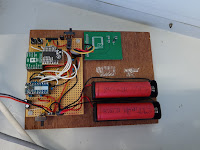 After the component selection failure with my last solar prototype, I resolved to have another go.

This time, I decided to build as close an equivalent as possible on stripboard despite the presence of several SMD-only components. For this I needed a QFN20 breakout and with the buck convertor, I used one of the first boards I had made, cutting off the large empty sections. The QFN20 was not fun to solder but it works.

I'm glad I went through this step as it showed up a poor selection of GPIO pins for the connection to the MCP73871 charge controller. My very first prototype used an evaluation board and not all the connections are broken out on it. Moving the status connections to the ESP8285 did what I wanted but dragged one of the pins low and stopped it from booting in some states. This is one of those things that again I should have picked up from reading the datasheets, but didn't.

With a little shuffle of pins, the prototype is ugly but seemingly nicely functional so I've dropped it into the shed to test. Late November is a bad time for solar power in the UK, so it's a bit of a 'torture test' of charging viability. It's quite likely to fail as I've not put much in the way of smarts yet about when it sleeps or switches off the radio. 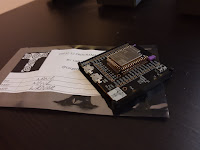 In the meantime I've bought an ESP32S2 module and breakout adapter from a Tindie seller. I may build a second prototype based around this as the S2 is like an ESP8266++ with Bluetooth support and lots more resources without seemingly much more power draw. The extra GPIO pins won't be unwelcome too, the ESP8285 has few and I've ended up re-using the UART pins. Not a big deal but it means you can't have Serial debug info with the charge controller working and you need to rely on OTA updates after an initial upload of the code.

This prototype ran for roughly 66 hours before the battery got low and it started sleeping in an attempt to allow the sun to charge them. That's plenty enough for my requirement of a full weekend's service.
However, from the logs it looks like it only spent 4 hours actively charging the battery, which is shockingly low even given its shady position in the low winter sun. As the MCP73871 only has three binary status indicators I don't feel I have enough data to be clear what contribution the solar panel was making to the runtime so I am going to modify this prototype and add an INA219 current monitor inline with the battery.
Posted: Friday, November 27, 2020