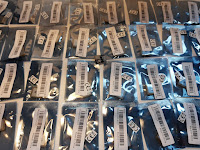 I have for a very long time wanted to build in the sort of 'scanning' you see in sci-fi movies to our LARP events as an actual working piece of tech. As the majority of our events occur outdoors the obvious answer is GPS. So I've made a gamble and bought forty GPS modules that came up just cheap enough to justify it to myself.

More so than other modules, cheap GPS modules seem to appear, disappear, then a few months later something similar but different appears on the market. I had identified some I wanted for this project a while back but then they disappeared and as I want to make a compact wearable with a 3D printed case, changing modules is non-trivial.

These super-compact modules look just the ticket and ordering them is an attempt to force my hand into making progress on this. The plan is that most things I build which are connected to the mesh network will have a GPS module. I did this a long time ago with the 'magic compass' but doing it at scale opens up the possibility of making something like the 'motion tracker' seen in Aliens etc.