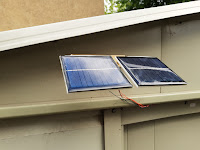 A bit of data logging showed a single 1W panel useful for supplementing battery power to my mesh network node, but not really enough to charge it meaningfully at the same time. My garden is south facing and the house blocks direct sun lots of the day so it was only the few hours where the panel was in strong direct sun that the result was acceptable. For something that spends a lot of the time asleep this would be reasonable but as I want each node to run for all the waking hours then I need it to do better. I did get 52 hours of runtime, which is technically enough for my needs if I fit two 18650s in the node, but I still don't like the thought of it running down constantly with only a tiny amount of headroom.
The data also shows the regulator board I took out of a drawer is an LDO, not a buck converter, so it's 60% efficient a lot of the time. I will make a pin compatible replacement with the converter I specified for the final boards and that should be a big help.
I've now set up two 1W panels in parallel to make an effective 2W panel. Only a few hours later it's clear this makes a massive difference as they spend lots of time charging the cell rather than just 'treading water'. I'll leave the test to run until the battery protection kicks in at 3.5V but it looks like 2W panels really are what's needed even if I were to replace the LDO. There are some really quite affordable 2W 5.5V cells on Banggood, so going up in size isn't a big deal.
Posted: Wednesday, May 13, 2020 No comments:

After a little fiddling around today I had software on ESP8285 node so I can keep track of the battery use and how well the MCP73871 manages things. Working at my desk it seems to seamlessly charge then swap over to battery if needed, but more importantly if there's roughly 0.5W charging capacity, which is what I'm expecting from the solar panels I have, available it'll run the ESP8285 and use excess to top up the single 18650 I've fitted for now. This is exactly what I was hoping for from the chip, but what's not clear yet is how well it works around dawn and dusk. Playing around with my bench PSU would give me some idea but with solar cells varying voltage under load I've just gone straight for a practical test.

The code I've put on isn't anything like the final application but it does sit there connected to WiFi pushing data to MQTT every 30s so it's a pretty reasonable test. I'm dropping the output into a .csv file on my server and I'll look at it periodically to see how the battery fares. As I wanted real timestamps on the data I used the quite nice ezTime library to sync with NTP but more importantly maintain a usable time based off the ESP8285's internal clock and only periodically update it. This is a feature I will need when things happen for real, although I'll probably have to use GPS and a local NTP server due to lack of guaranteed internet access.

Also Blogger has changed and all my layouts are broken. Sigh.
Posted: Tuesday, May 05, 2020 No comments: