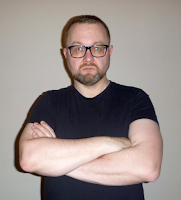 Hi, I'm Nick and I've been playing around with 'doing stuff' pretty much all my life, rather than just consuming entertainment.

At University I studied Computer Science but even back when I was at secondary school in the eighties I'd always felt computers were lacking something until they were interacting with other things. It doesn't matter if that's other computers or physical things.

It wasn't until the arrival of the 'maker movement' in the noughties which opened up information and cheap resources for 'physical computing' that I could really get involved. In the meantime I kept myself busy with various motorcycle projects, including helping friends prepare club level race bikes and fiddling around with electric guitars.

Almost everything I do here is in direct response to a need, usually as part of a live action roleplaying game. It's my primary hobby and most games offer up opportunities for making something that behaves somewhat like a theatre prop, but that has to work reliably in unpredictable situations.

I'm a 100% hobbyist but if you ask me I may well be up for collaboration or helping you make something.

You can find me in other places too where I foolishly try to maintain the same profile name.