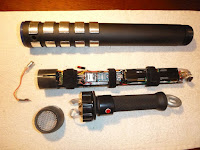 Last year I made a pair of slightly phallic Lasertag stun batons for the UKLTA's indoor LARP "Zero Light Thirty". Sadly they've always been a bit unreliable and irritating.

In an attempt to make using them more immersive I fitted tilt switches so they automatically 'powered up' when you raised them. However these have proved kind of unreliable and they'll turn off/on a bit randomly. 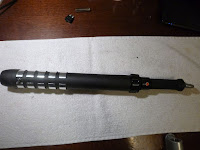 The actual on/off switch and charging socket is buried inside the tube, forcing you to unscrew the handle at the start/end of the game. Which also means disconnecting the cable for the trigger and that's kind of fiddly.

I've made something that doesn't come to pieces very easily despite that being necessary all the damn time.

Then for some reason I thought adjustable power levels would be good so the power switch doubles as a 'power level' switch and even I can't remember which way round the 'indoors' and 'outdoors' settings are.

At the time I didn't have the 'data over tag' signalling code that would allow me to build everything from scratch. I've got an Arduino piggybacking over a Spartan Designs Lasertag board, which was set up for stun shots. The Arduino reads the outputs on the board normally used for a status LED to see if it's ready to fire, then pulses the trigger of the Spartan Designs board when you push the trigger.

All in all they're a bit of a dog's breakfast.

There's a refresh of the game content coming up and I've been asked to fix up these props. If I can make it look tidy I'll ditch the tilt mechanism and just put all the switches & sockets on the outside.
Posted: Tuesday, October 20, 2015 No comments:

If it bleeds we can kill it 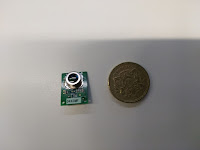 You know how the Internet is. One minute you're looking at one thing and the next you're thinking "wouldn't it be cool to make a thermal camera". You know like Predator vision.

Also a bullshit conversation about making one at a recent LARP didn't help with the whole "doing the sensible thing" thing.

Unlike so many bits of tech we take for granted as easy in the world of supercomputer smartphones and big data this is still the stuff of movies and expensive law enforcement hardware. 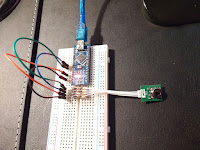 When it comes down to it, far infra-red is a lot harder to deal with than visible light or near infra-red, as used for 'night vision' CCTV.

Far infra-red doesn't pass through glass for a start and lenses that can focus it have to be made of things like silicon or germanium.

Then it doesn't work with the usual CCD/CMOS sensors found in digital cameras. There are similar solid state devices using different tech around but they haven't had the development work that devices for visible light have.

A bit of a read around the subject shows that Omron do a very affordable thermal sensor, the D6T-44L. This is quite easy to talk to over I2C and comes in at about £37 by the time you've bought the tiny connectors it uses. Great stuff, but sadly it only has a resolution of 16 pixels. Not 16 megapixels, 16 pixels. It also only does about 4FPS. Still it seemed worth a punt as a first go with this kind of tech as it's quite manageable.

Here I've taken the readings from the sensor and used them to make a pretty responsive display using ye olde MAX7219 and an 8x8 LED matrix. As it already involves some upscaling I've used each block of four pixels to do very basic dithering that represents different temperature readings and made it auto-range.

This doesn't result in desperately sophisticated imagery but I'm happy with how it's come out for an afternoon's faffing around.

Once I connect the sensor up to something more powerful (probably an RPi) I'll try combining it with some conventional video to do a pansharpened image. If this works OK I may end up buying a more expensive sensor like a FLIR Lepton, as I suspect this won't really be usable for much beyond a curiosity.