You wait for a bus 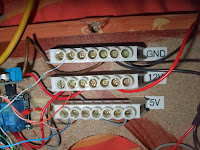 Then three come along at once.

I was showing my partner progress with the Time Machine at the weekend and it suddenly died.

As expected when I looked tonight this was down to crappy power distribution, something had come loose.

It's been obvious for a while that I need to sort this out so I'd already ordered some busbars to do it. For the wire gauges and amount of current involved they're OTT but they are nice and tidy.

I also suspect the tiny switched mode DC to DC converter I bought to generate 5V has died. Most of this runs off 12V and the Arduino makes 5V for the odd bit like the remote control but it's not enough current to power all those servos.
Posted: Wednesday, November 27, 2013 No comments: 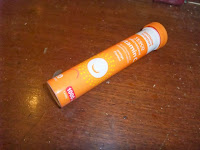 I have for some time intended to come up with some kind of instrumentation that you need to peer into on the time machine.

The idea is that it's something that will show you a readout of consequence without it being as modern as an LCD screen. To force the whole 'peering' thing I decided it would have to be seen through a security door viewer. Besides I happened to have one kicking around. 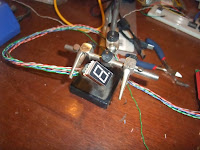 In a perfect world what you peered at should be something made from Nixie tubes but realistically that just isn't going to happen.

The next idea was an 8x8 LED dot matrix as they are cheap, very versatile and I have one kicking around, along with the serially driven driver chip to make it easy to use. I've been intending to go with this for a while but struggled with how to make it look good. 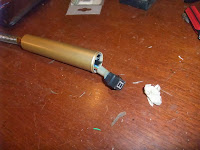 All the LED matrices I've seen have been pretty chunky things, designed to act as a big bright visual display. Smaller things tend to be done with LCDs, for understandable reasons.

So I've struggled with how to make this work physically. I was going with hollowing out a knob from a newel post but it was simply huge and started to go awry as soon as I started doing it. 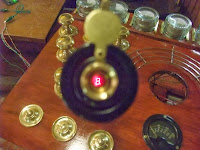 Last night it occurred to me that going more old school and using a seven segment LED display would give me a much more compact option and keep the 'primitive' feel at the expense of being a less versatile display.

Some very quick fettling up of a plastic tube originally holding vitamin pills has turned out a pretty good looking viewer in my opinion. 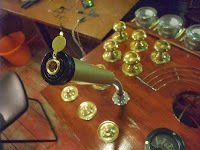 Once you actually peer in it's pretty obvious it's not a piece of steampunk tech but until then it's a tube with a glowing display in and pretty much exactly what I wanted.

I may experiment with pushing a little paper or cotton wool inside to diffuse the display so it looks more grungy but it'll pretty much do as it stands.
Posted: Sunday, November 24, 2013 No comments: 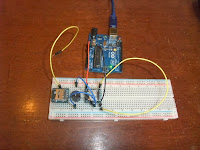 A few months ago I bought a couple of WTV020SD sound playback modules.

From messing around with the Spookytron I knew the Arduino wasn't really any good at dealing with audio. It consumes a lot of resources both in terms of CPU and pins/timers to access an SD card and then play a WAV file back.

Pretty much on spec I bought these modules thinking they'd 'be handy' as they were very cheap.

I have now wasted several hours spread over a few weeks trying to get them to do anything at all. Even in standalone mode where they work like a basic button driven MP3 player they are simply inert. I've tried everything I can think of including buying some small capacity SD cards as they are apparently fussy about large ones.

So now I'm going to order an equivalent branded item. I've kind of left it too long to return these, but I'm more annoyed at the loss of my time than the money.
Posted: Saturday, November 23, 2013 No comments: 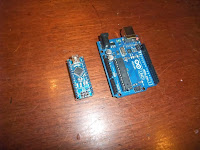 My next project after the time machine will be considerably smaller and I'm starting to throw a few bits together for it.

This seems like a good opportunity to try out some of the Arduino variants beyond the Uno/Mega. This is a Nano which is pretty much just an Uno in a smaller package.

The plan is to solder it to a piece of stripboard then solder all the connections to that. If it didn't have the headers attached I'd solder the wires straight to it. It's for a permanent installation rather than a bit of quick prototyping.

The project involves interfacing a few things together and connecting them to a PC so I've also bought a USB hub with flying leads which I've stripped down so I can solder straight on to it. There won't be room for a tangle of USB connectors.
Posted: Tuesday, November 12, 2013 No comments: