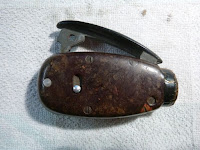 I'm playing a post-apocalyptic LARP in a month or so and I wanted a torch that didn't rely on batteries. You can get modern dynamo torches but they're usually very cheap plastic things. I saw this vintage Bakelite one and loved the aesthetic.

Sadly it makes an utterly useless torch. The output is akin to a knackered glow worm. 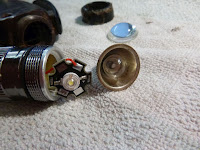 I had a little look at the bulb assembly and figured I could cannibalise a modern bright LED torch for its LED/heatsink arrangement. There's no way it'd be as good as a modern torch but the massively improved efficiency of an LED should give more light from the dynamo. 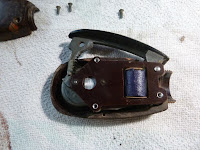 Inside it's really nicely constructed. My reasoning for using this in the LARP even though it's set only a little way into the future is that the torch is physically robust and likely to survive the fall of civilisation.

In my experience, cheap plastic stuff from a decade ago has gone all brittle and started to die. 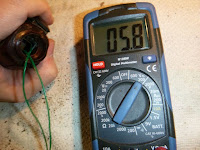 Quickly soldering a couple of wires to the bulb terminals got me about 6-7V AC output from the dynamo. This is in the right region to drive a typical LED torch. The voltage is a little high for the one I'm scavenging from but the current isn't going to be huge so I'm reckoning it'll be fine.

No use overthinking it. 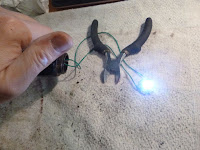 With the LED soldered on, I instantly got a nice bright light when pumping the torch. As the output is AC the LED is flickering on/off but too fast to notice except when spinning up/down. 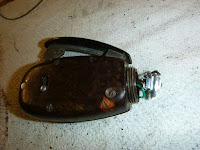 To get a little more even light and not 'waste' half the output from the dynamo I desoldered a bridge rectifier chip from an old PSU board and put it between the output and the LED. Sadly there's no space for a smoothing capacitor. A quick check with a meter showed about 5-6V DC.

I had to file the LED board down a little to squeeze it into the space the old reflector lived in, but nothing drastic. 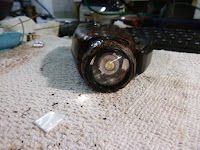 All done, now the torch gives a very usable output when pumped. It's enough to light a dark room so you can see where you're walking. Outdoors it won't go far, but it's not for that. The lens is a fisheye one designed to make a very broad spread.

It would have been easy to get sucked into trying to make a proper regulated, smoothed PSU fit in the space but this has got me almost all the way there in a few hours of messing around.
Posted: Sunday, March 04, 2018 No comments: