Smaller on the inside 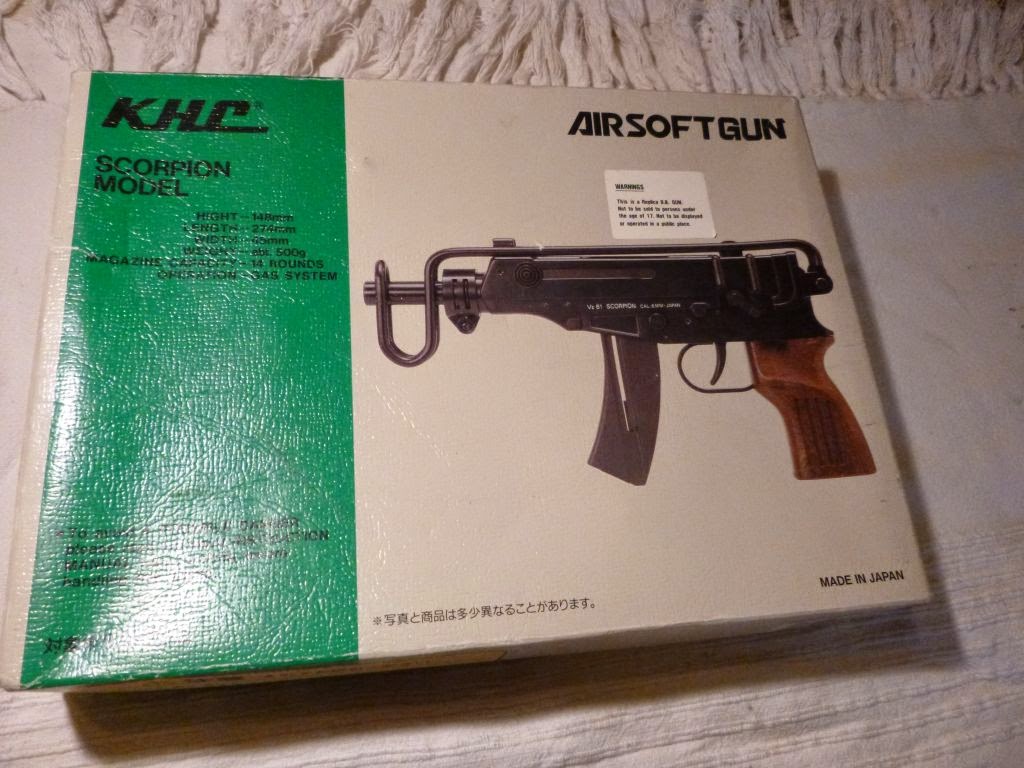 At a loose end this afternoon I stumbled across this old airsoft machine pistol I bought way back in the summer, thinking to use as the basis of a Lasertag gun. I've tons I should be doing but stripping this down and messing about was what appealed. 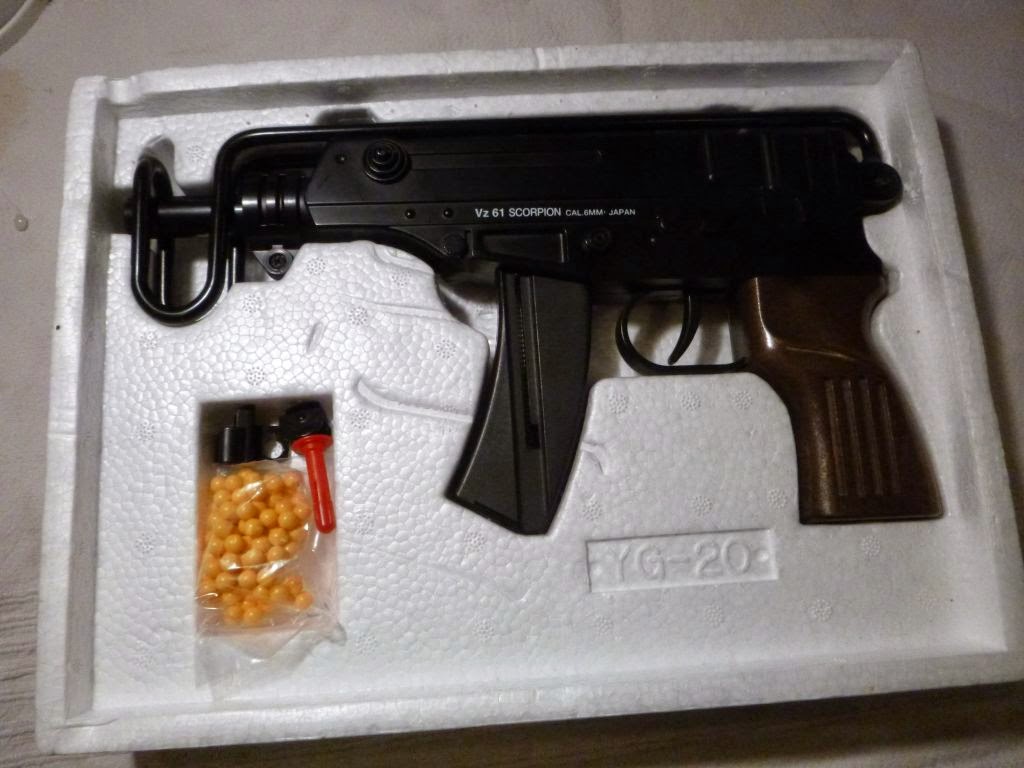 It's not a bad looking thing and the clip over folding stock is really quite cool. Visually it's kind of like a mini-Uzi with a bit of Kalashnikov DNA. 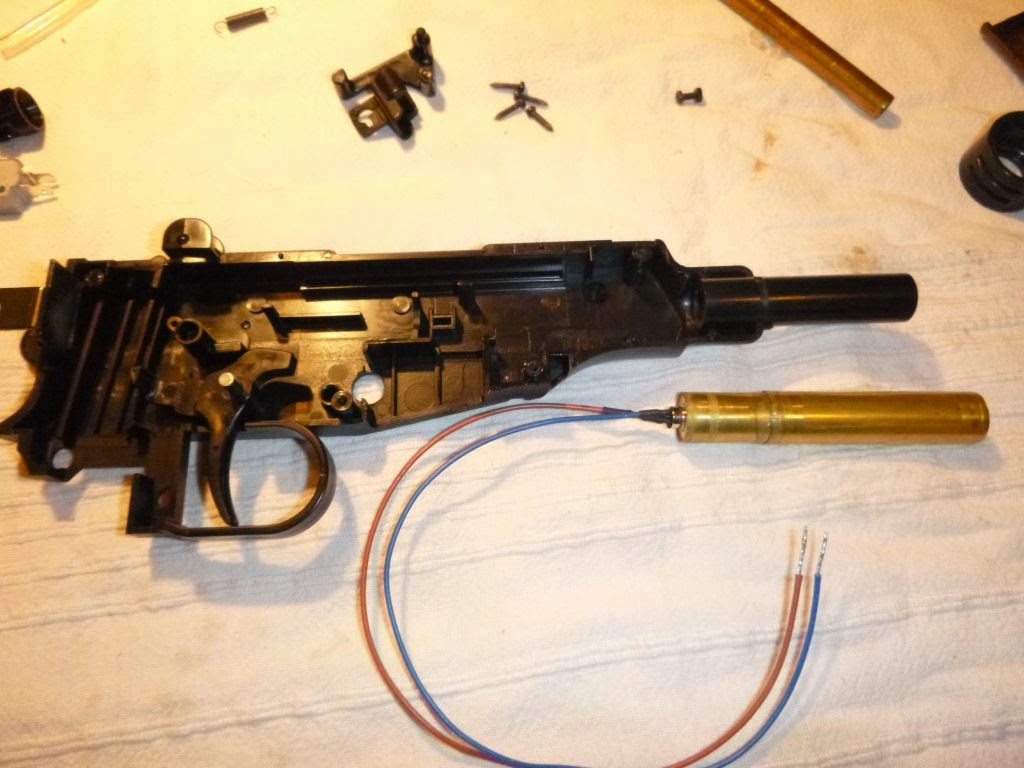 The whole thing is quite small, so it's going to be a bit of a challenge to make it into a working Lasertag gun. Thankfully though, the emitter assembly I bought looks a good fit to replace the current barrel.

The diameter is very similar so it's not going to mess up the look of the gun and should mean is going to be an easy fit. 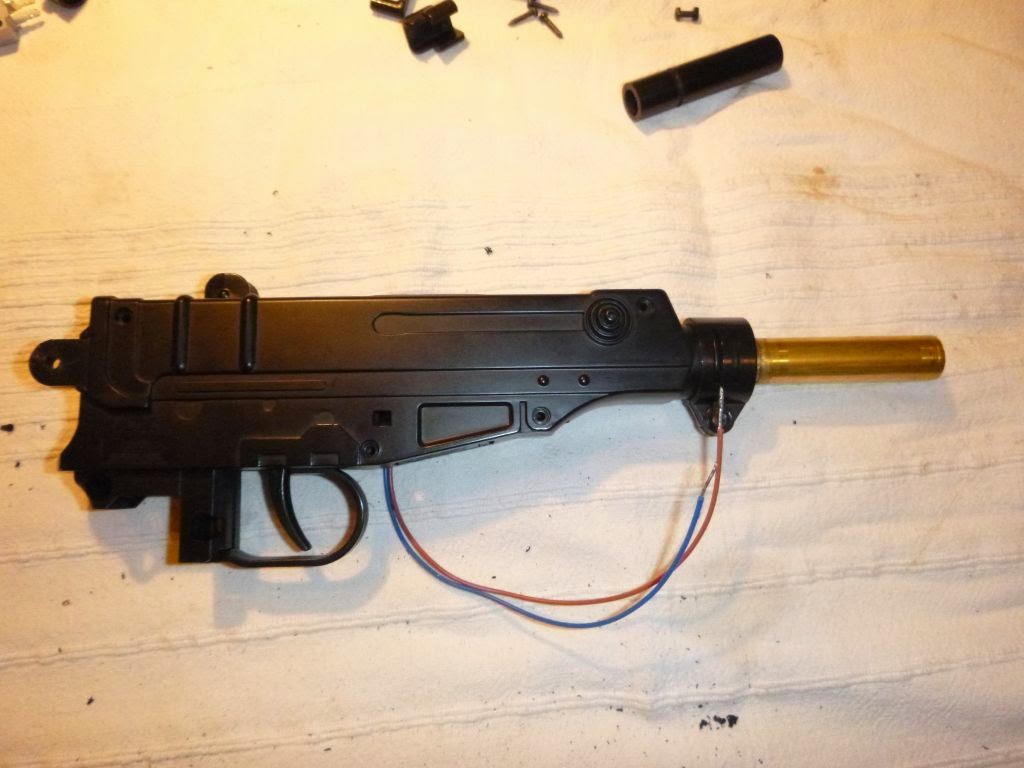 With a tiny bit of messing, the emitter directly replaces the barrel. It protrudes further from the front of the body but I may able to slide it back somewhat. I've not done that just yet as one of the locating lugs for the body is in the way and I don't want to remove it. If the barrel looks OK like this I'll leave it. My only worry is it may not be desperately secure given how far it sticks out. 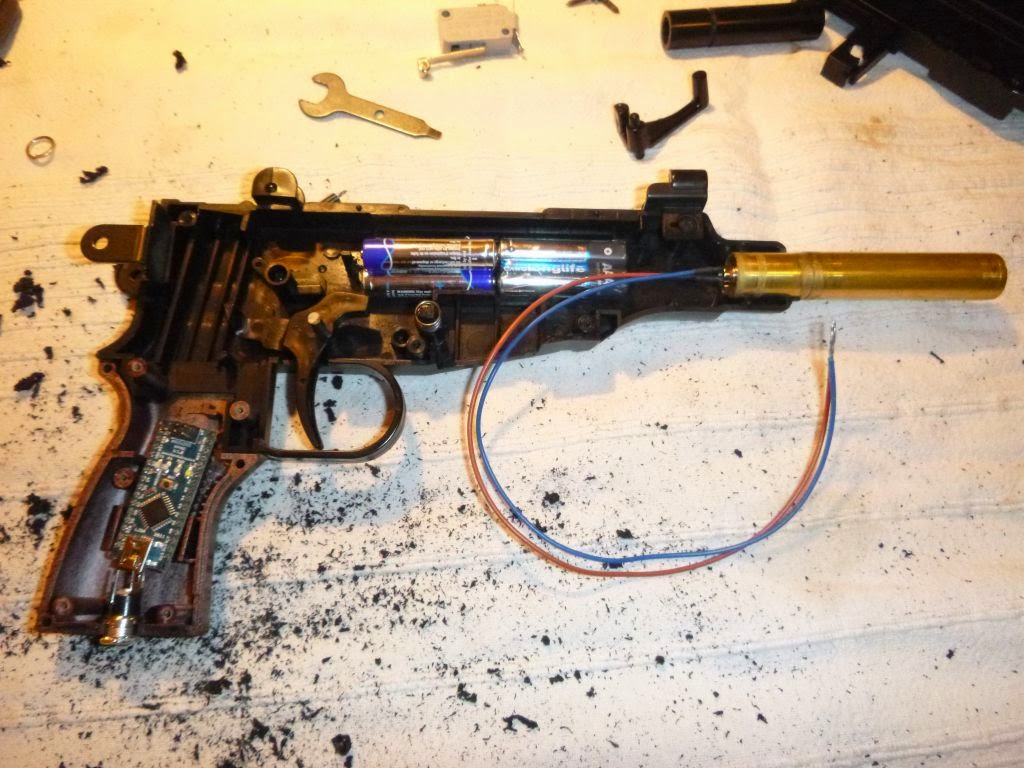 So here is a very rough mockup of how I might mount the components. Obviously missing right now is a speaker or sound board. The latter I can easily fit in, but the speaker is going to be very hard. I've got a couple of small ones but they're still far too big.

No chance of fitting the muzzle flash LED inside the emitter as I've bought it complete. It'll have to be somewhere on the front face of the gun, but this shouldn't be hard to pull off.

I need to buy some NiMH batteries to turn into a 7.2V brick. The 3.6V Li-ion ones you get are appealing but more complicated to charge so ideally need to be removable.

I also need to buy an assortment of switches as I've nothing but little PCB tactile stuff at the moment. This will need a power switch, reload switch and trigger. I've a half formed plan to use reed switches but it might not work out.

The Lasertag gun I bought made up by Phil was constructed out of a Playstation Time Crisis style light gun and I can see why. You get something already designed to emit IR with a switch at the trigger and a smattering of other buttons.
Posted: Saturday, September 27, 2014 No comments:

Back to the future 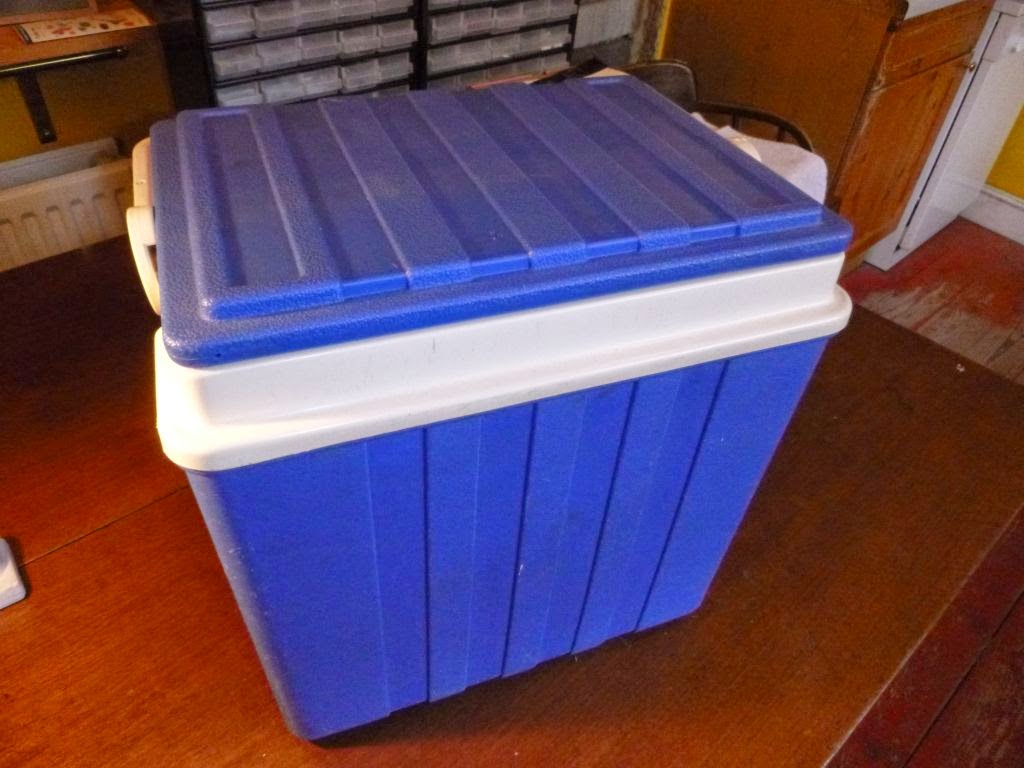 Not for the first time my parents have provided me with LARP kit. Months ago they asked me if I wanted this old plastic coolbox and I sensibly declined.

Now, with a Blake's 7 LARP coming up I remembered the offer and picked it up from them. On numerous occasions, particularly in series 1 & 2, it looks like the B7 crew use a large plastic coolbox as luggage. 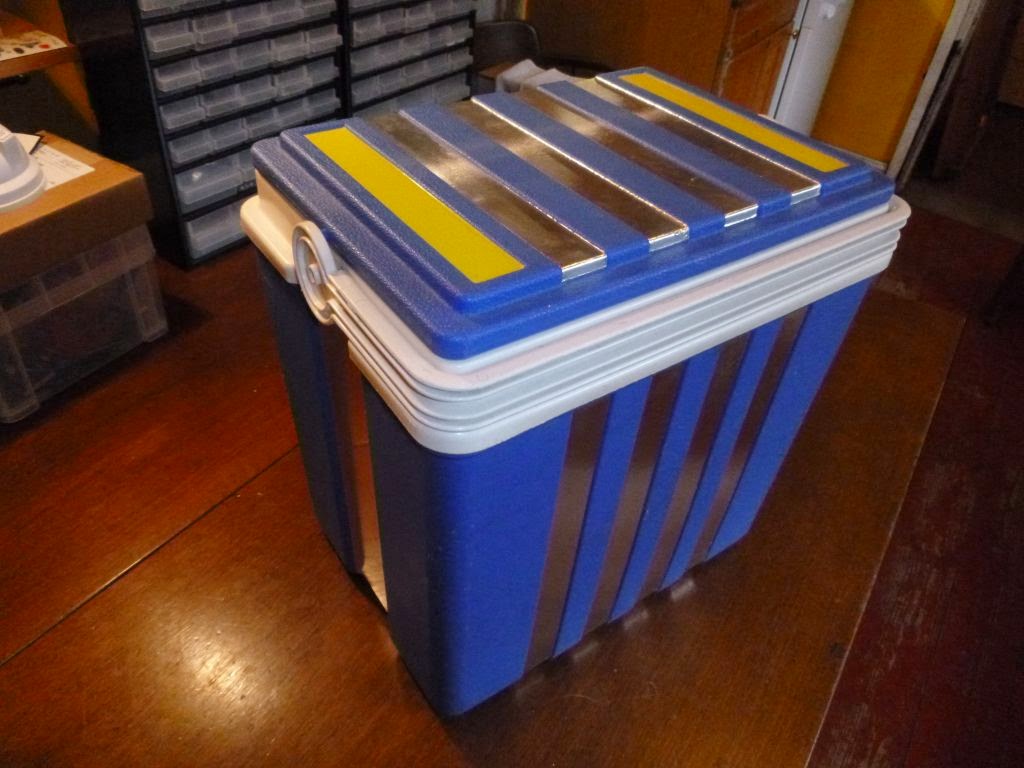 A combination of aluminium foil tape and clashing yellow tape has given me something that looks late 70s futuristic.

OK, so the box in B7 is generally red, but this is LARP not cosplay.

Over the next few weeks I will attempt to fill it with a bunch of weird probe type tools like those Vila and Avon used. I'm, playing a technician type character and want to have some bits to play with in game. I reckon crocodile test leads, multimeter, a few things with flashing lights on etc. will work nicely.
Posted: Sunday, September 21, 2014 No comments: 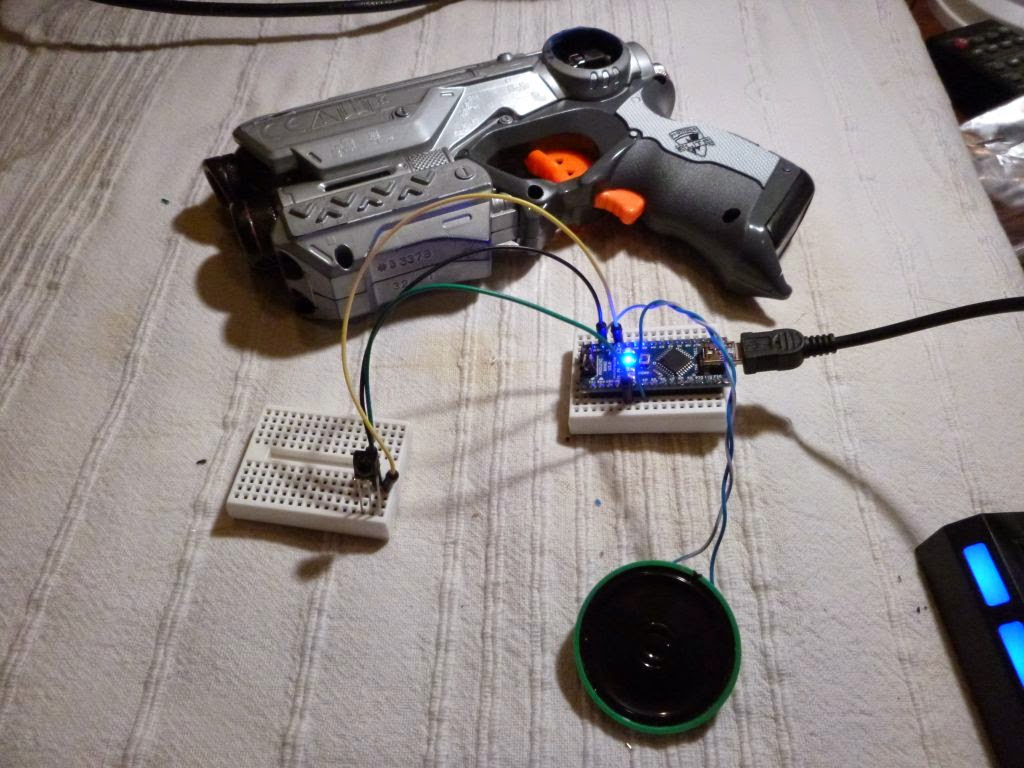 The flipside of making my own Laser-Tag gun is I also want to make my own sensors.

Phil Higgins makes a sensor designed to be worn on the head which is accepted to reliably take hits outdoors and has all the 'data over tag' stuff coded in by him already. Loads of people in the group I play with use these and I can't see myself replacing mine with something of my own devising.

However I do want to make a 'target' for testing Laser-Tag guns against and maybe some props that can be shot as part of broader functionality. So tonight I messed about with a simple test rig of an IR detector wired up to an Arduino with an Interrupt Service Routine attached to the relevant pin.

Laser-Tag uses a 56Khz carrier signal which is slightly different from typical IR remote controls, but there's a recommended component for putting in the sensors: a Vishay TSOP34156. This filters out the carrier signal and background noise from ambient light, leaving you with a microcontroller compatible output of just the encoded signal.

So far so simple, I now have a simple sketch that will flash a light and play a tone when I shoot the sensor. It's not really matching the Laser-Tag signal, just counting pulses and registering a hit if it gets enough in a short period. One of my remote controls sets it off.

This is something I can work on. For now though, tonight's fiddling has shown me that building a target shouldn't be hard. So I can start making the case etc. and then hone the code once it's in a usable shape.
Posted: Monday, September 01, 2014 No comments: