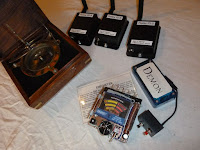 I've not been blogging recently as I've been working on a complicated multipart prop for a UKLTA Lasertag game which uses the TV show Supernatural as its background.

Some months back I had discussed the game with my friend Mik who said it would involve a demon possessing different people in turn. To which I said, "if I started soon I could probably build something that will track it". 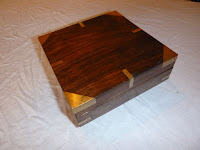 Here's what it ended up as some months later. This is a 'magic compass' made from a cheap eBay purchase which tracks the demon. Who carries around the blue box you can see. Getting this to happen involved a whole load of making and coding.

There are GPS units in the compass, the small box the demon carries and the EMF meter I later decided to build. Then packet radio to share location data. Then relays to relay the data, increasing range. 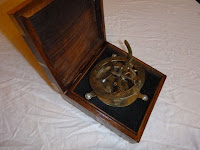 It all escalated quite quickly and I plan to write each component up properly, but at least I can share the final result.

As alluded to previously I've ended up writing my own simple mesh networking protocol to make it happen. Which is quite a task, but now I've done it it'll get re-used, oh yes. 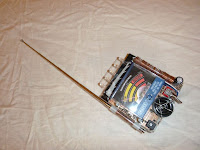 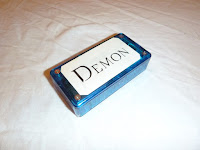