Having bought a CNC engraver I got very caught up in messing around with the optional laser module.

I'd previously not considered a cheap diode laser would be worth having, especially due to their reputation for rubbish software.

However once I'd played with it and set up Laserweb this changed my mind and I ordered a 2.5W A3 engraver. The 5.5W models are twice the price and probably not twice as good, online discussion suggests they are far worse at intermediate power levels which are useful for engraving. If the laser modules come down in price later I can always upgrade.

It's a much simpler machine to build than the desktop CNC, with steppers directly driving a belt and dragging a carriage up and down the rails. So I got it put together over an hour or so and simply connected it to my existing Laserweb setup. The drive ratios needed setting but apart from that it 'just worked'. Now I need to tweak things like the maximum speed and acceleration as it draws quite slowly but straight away I started to get usable output from it.

Here's a little video of it engraving at max 25% power. This burns really well so I'm thinking 100% will cut some thin stuff quite nicely, just need to start experimenting.


My experience with the laser module in the desktop CNC has made me less paranoid around it, which is probably a bad thing. So I'm going to set this aside until I can find some time to make an enclosure with a safety interlock on the laser power. I'll just stick a normally open switch inline with the 12V power so the moment you lift the lid the steppers and laser get cut. The microcontroller onboard takes its power from the system driving it.

It'll have a Raspberry Pi inside to run Laserweb so hanging a Webcam off this to give an internal view when the lid is closed should be trivial. I quite fancy making a bit of a control panel on the front to control the Pi and also control power to the laser perhaps via a GPIO driven relay so the whole thing has a single on/off switch but this is verging on yak shaving.
Posted: Tuesday, February 21, 2017 No comments: 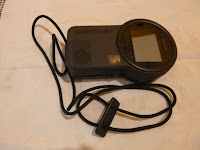 In a conversation with a friend about making a compact very retro computer thing, the old 'pocket' CRT TVs from the 80s sprang to mind as a good option for the display.

It seems they're available for little money on eBay and nothing says retro better than a genuine CRT. The display just has a different look to it, especially a monochrome tube. Monochrome tubes have no shadow mask to make red green and blue 'pixels'. It's just a uniform coating of phosphorescent material that the electron beam scans over uninterrupted and I always preferred this look. It's less tiring than a colour CRT display in much the same way the e-ink display of a Kindle is easier on the eyes than the standard screens in most tablets and laptops.

After about ten minutes of messing about, mostly taken up by finding suitable cables, I got a Raspberry Pi desktop displayed on it. No I don't really know what use this is yet but I love it.