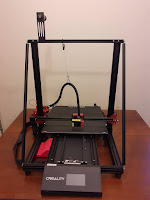 Ever since I got my cheap Ender-2 I've been a fan of Creality 3D printers. That got partnered with an Ender-3 when a cheap Black Friday deal appeared and I can almost treat this one like an appliance. So long as the removable bed plate is cleaned and degreased occasionally it just prints.

I know some people struggle with their Creality printers, build quality can be variable, but both mine have been excellent and an Ender-3 of some flavour is my default recommendation to somebody new to 3D printing.

This is not because they're the best, they're far from it, it's because they're adequate and cheap. If you find you're using an Ender-3 lots, great now start modding it or buy something better. If it gathers dust after the novelty wears off you've only wasted £150-200 or thereabouts.

My Ender-3 gets used lots and short of an Octoprint setup, webcam and lighting isn't actually functionally modified at all. I'm into practical structural prints that will probably get some refinishing, not beauty prints. The Ender-2 is mostly idle but I sometimes run both at the same time if I'm working hard on a project.

Now I've scored a used CR-10 Max, which is at the other end of the spectrum of Creality printers. It's their biggest at a build volume of 450x450x470 and on account of that, by far their most expensive model. The huge heated bed has its own PSU.

For a long time I've wanted the facility to print larger items and I've got some costume parts I had literally been wondering about how to create in the days running up to seeing this for sale. Now I need to up my 3D modelling skills to being able to produce armour pieces.

Breaking out of the Espressif/Arduino rut 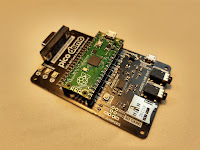 I have been noodling around with ESP8266/8285/32 microcontrollers almost exclusively now for a couple of years.

The absolutely excellent price/feature/performance combo of these Espressif MCUs means I simply don't see any reason to change. There  have been a couple of things I built using AVR based Arduinos for very specific reasons to do with high I/O pin count or generating IR Lasertag signals with hardware timers, but that's it.

I've also mostly given up on Raspberry Pi based things because once an MCU has Wi-Fi and >64KB of RAM you can do most single-purpose things apart from a complicated GUI and I've been working on a workaround for the latter.

Likewise, much as people sneer at the Arduino IDE it is terribly easy to set up and use, broadly supported and just C++ (with an odd/incomplete selection of standard libraries) under the hood.

I have however been tempted by the new Raspberry Pi Pico. It's cheap (for now), dual core, has native USB, plenty of I/O and a massive push behind it comparable to the Adafruit Feather ecosystem. So I tacked a Pico and interesting carrier board onto an order from Pimoroni to have a play with one.

This could be my gateway to MicroPython, although I can see myself also having a go with C++ as this board is actually a good candidate for porting my serial terminal UI library, given it has no wireless connectivity.