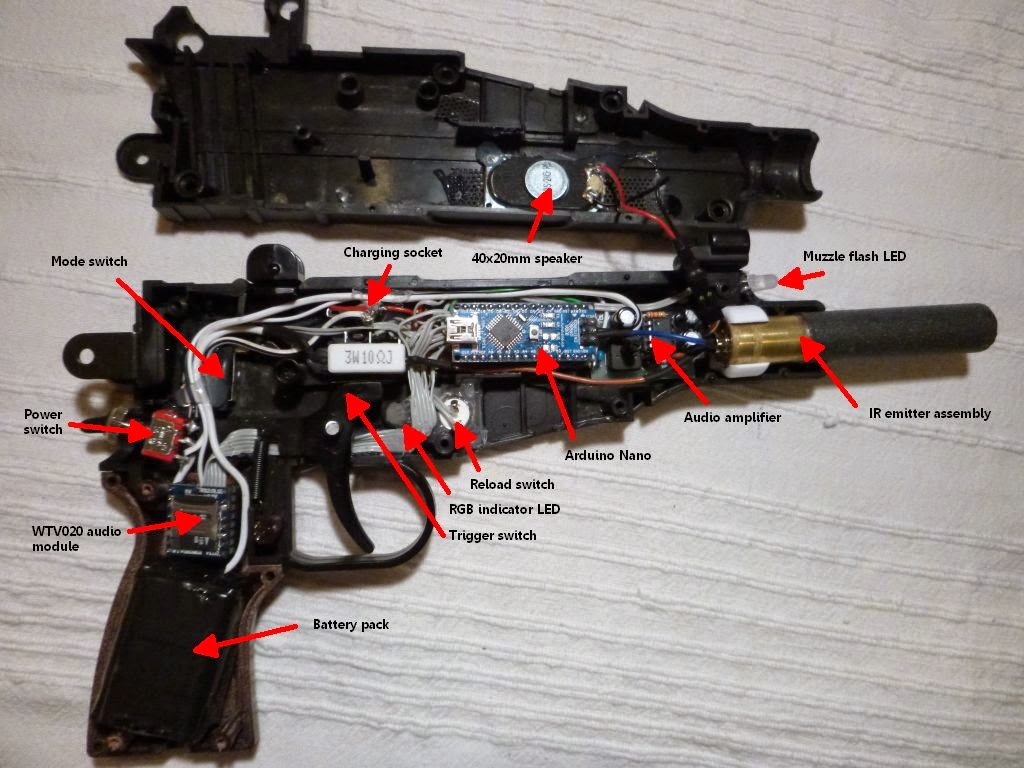 I think I've finally finished the Skorpion. Just as the Lasertag season ends until about March next year. :-)

Nevertheless this is again mostly about enjoying making something, not making something to a deadline. I was trying to finish it for a game this weekend and missed it, but in the end didn't fire a single shot all game anyway.

To make a functional Lasertag gun you need to squeeze quite a lot in, most of it is batteries, sockets, speakers and switches. The job of laying it out so it all fits nicely in a small gun body like this is more complicated than the electronics. 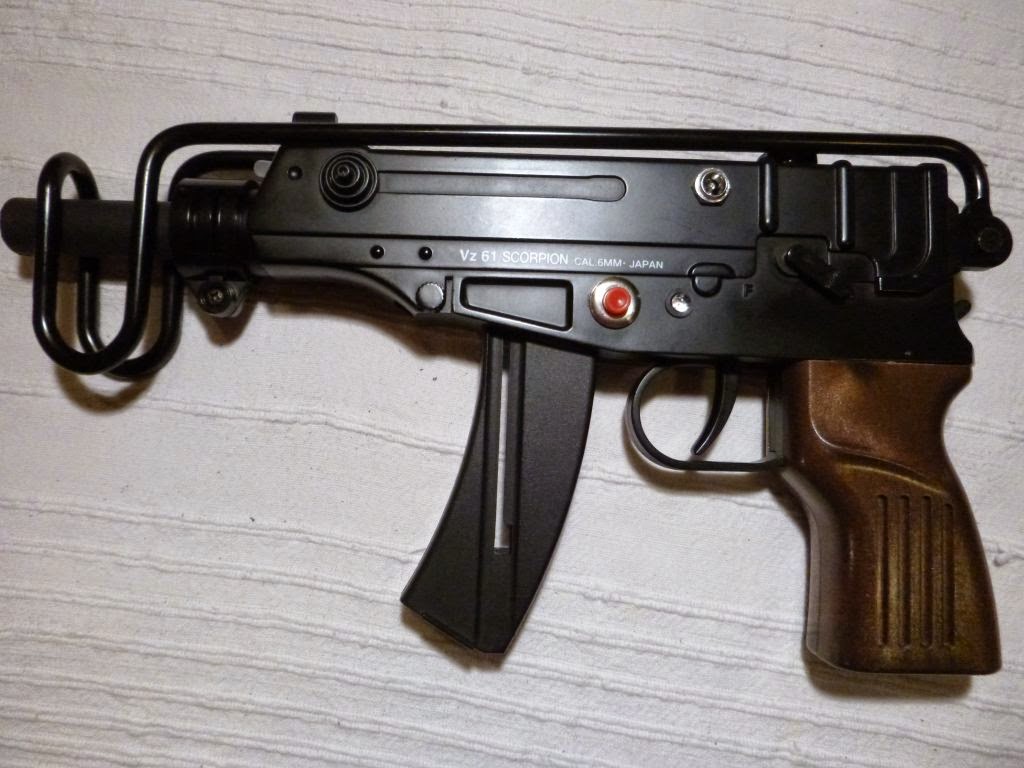 As I was using a bog standard Arduino Nano with headers connected to do the work it's quite bulky compared to the little PICs Phil's gun boards use. Likewise I've used an amp I had kicking around rather than making something as compact as possible. So I'd handicapped myself by using my usual stock parts rather than aiming for something smaller. Buried underneath it are the various current limiting resistors and a MOSFET to drive the IR emitter. The big white lump is a wirewound power resistor to limit the current to the emitter. It's undoubtedly overkill given the intermittent load I'm feeding the emitter, but I wanted to be sure it was OK. 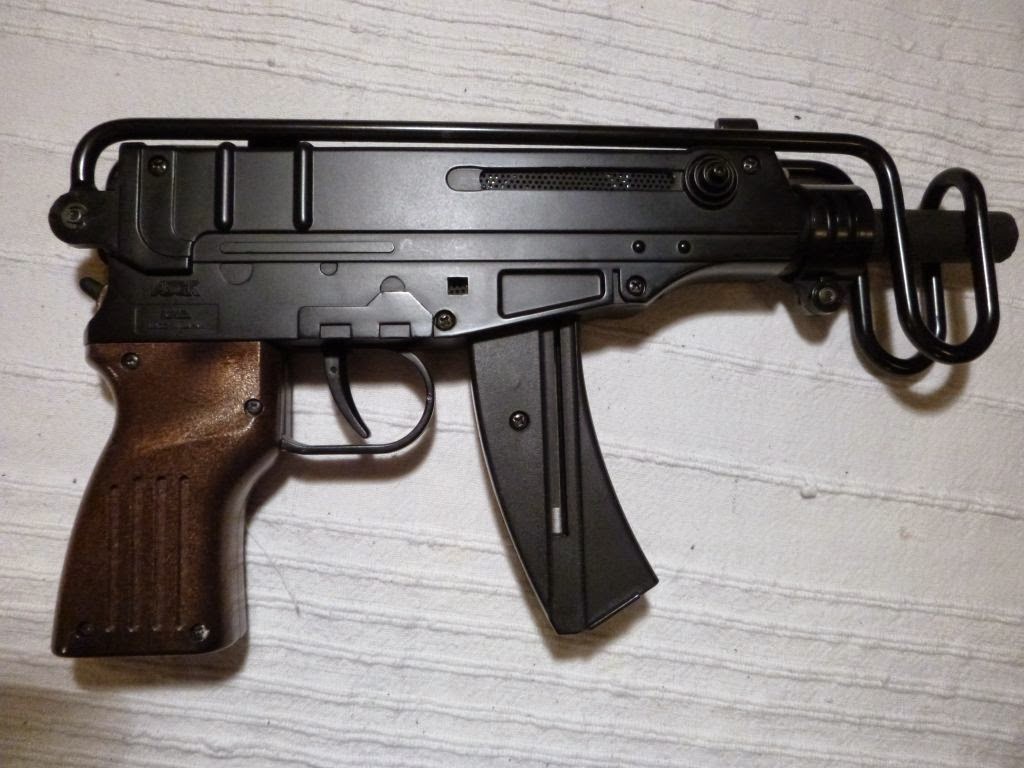 For future projects I've bought some Atmel ATTiny85 chips which should allow me to do quite a lot in a small space, at the cost of many fewer pins. They won't be any good for gun projects as there won't be enough pins to drive the WTV020SD but they might be OK for some really simple stuff. My next project may involve driving Neopixel LEDs in a garment so they'll be good for that. I've also picked up some Arduino Pros which are similar to Nanos but headerless and relying on an FTDI connecter rather than having USB on board. All of which makes them a bit more compact.

All Arduinos come with some LEDs onboard which glow alarmingly brightly in the dark and could be seen through the speaker vent in the gun. Which would be bad in a night time Lasertag game so I desoldered them carefully from the board.

This ended up being about the third iteration of getting it all squeezed into the body, which is why it's taken me so long.

The first try simply didn't fit due to untidy wiring. The second worked but with the tiny speaker the WTV020SD board simply wasn't loud enough unamplified. Which I should have known. Connected up to a large speaker in ORAC and Time Machine for ambient sound they were OK, but a tiny speaker needs something drive it hard.

The third time I had to shuffle it all around to fit the amplifier in and I managed to kill a WTV020SD sound board by soldering it to the wrong power supply. Good thing I bought a load from China.

So it's taken far far too long to get done, but as ever I revel in using something I've made myself rather than just bought. 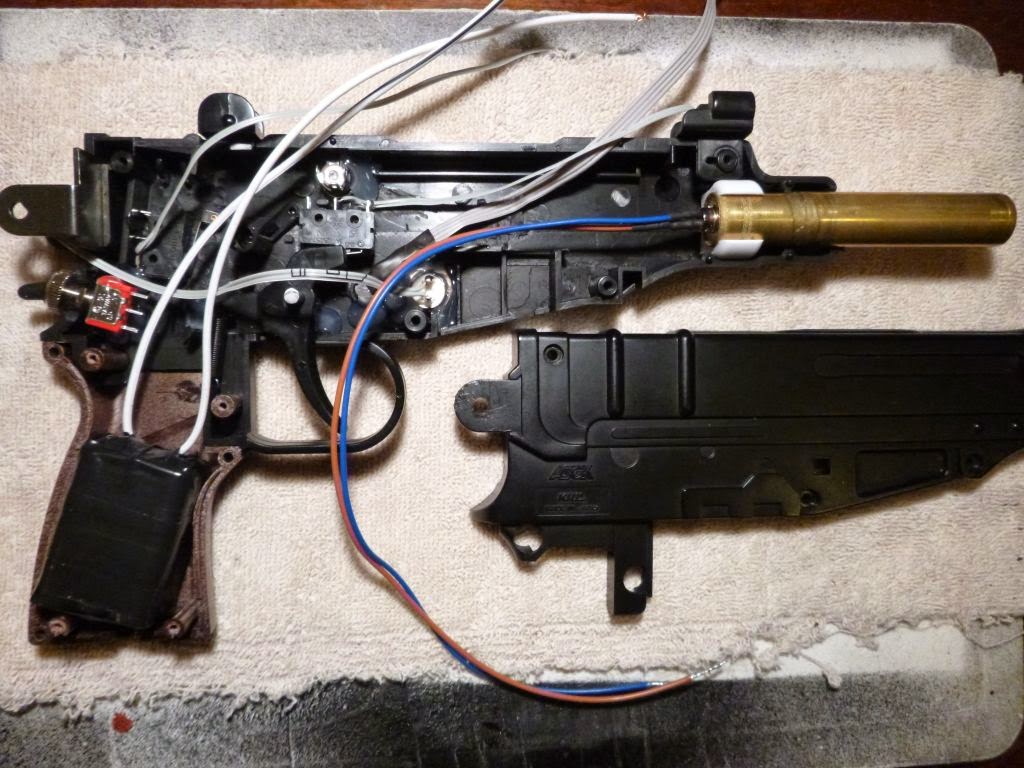 I've had a couple of evenings free to faff about with the Skorpion carcass so now it's getting much closer to the point where it can be turned into a functional Lasertag gun.

I think I now have most of the pheripheral connections I need and it's down to sticking a microcontroller, sound board and speaker inside.

What I've managed to squeeze in so far is...

With the battery pack inside the grip this actually leaves quite a lot of space to play with in the main section of the body. Buying a battery pack ready made would have been better but a quick bit of surfing didn't show up anything in the right shape.

This leaves me with just a muzzle flash LED to sort out before it's ready to stick a board in. I'm very tight for space on the front edge of the gun, it all kind of slopes backwards. About the only place I can see for this is immediately in front of the magazine. There's a little cutout that should allow me to embed an LED or two in a chunk of clear acrylic to make them more robust.

I'd like to have it inside the IR emitter 'barrel' but don't want to attack this with a drill. It was bought as a focused working unit and I don't want to mess that up.
Posted: Wednesday, October 22, 2014 No comments: 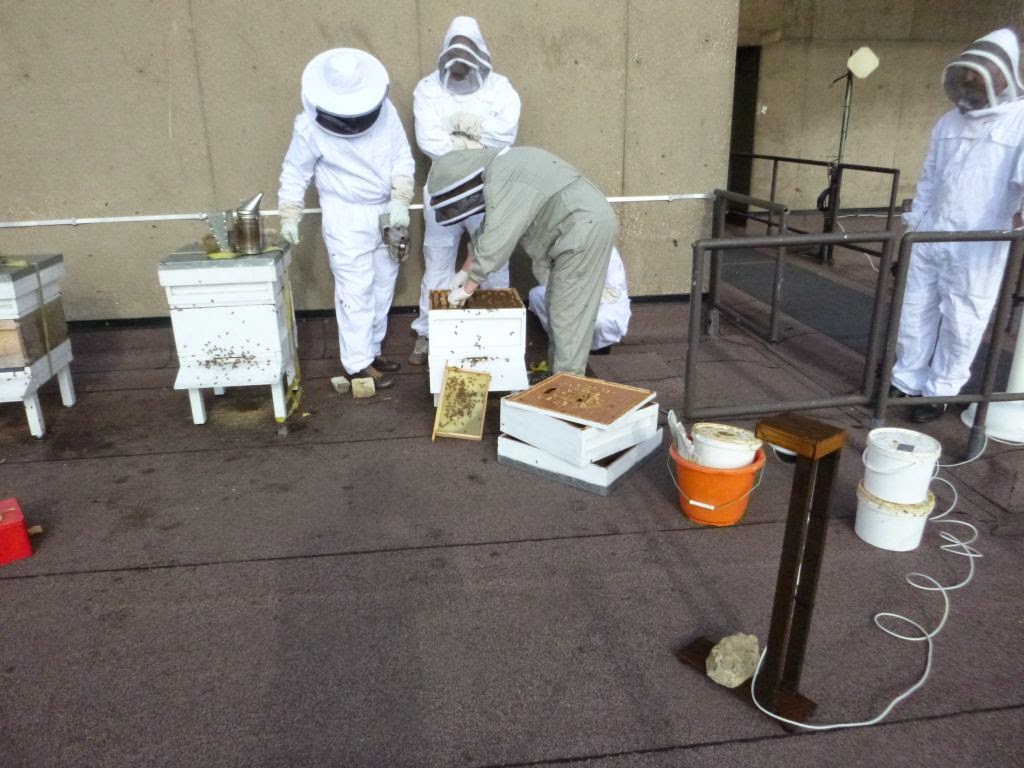 Today we had a bit of fun at work. The University has some beehives and we got asked to sort out a webcam that overlooked them.

Given the lack of money for this project, as per usual, we were limited to buying consumer quality kit for this. We've ended up with a TrendNet IP66 rated PoE dome camera which actually works quite nicely.

However like most of these things it's designed to fix to wall or a ceiling. Which doesn't really work given the location of the hives. So last night I knocked up the little stand you can see in the bottom right of the picture and stuck a couple of coats of wood preserver on it. It's not perfect but is solid. The brick is a design feature.

When we went up on the roof to put it in place, they were checking the hives so I actually got a couple of decent pictures where you can see the inside of the hive.

Once it's actually accessible from the Internet, which is my next job, I'll post a link.