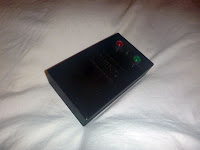 It's been a while since an update. We had been due to play the game I was building for at the end of June but we've had to postpone.

My friend Mik, who is the driving force behind the game, became very ill and while we could have finished off the work and played it didn't seem right.

They're a bit chunky but then they're hand built from hobbyist modules and have a 3xAA batteries in to drive them. So chunk was kind of unavoidable.

Also I've built a faux CCTV system with some Wifi IP cameras and a 'portal' that uses the same RFID cards to log you in. The portal is a single page full of JavaScript which links to the various cameras and either shows or hides them based on which card you present. So it's not really secure but it's for a game after all.

The setup uses a cheap eBay USB card reader and these just emulate a keyboard. When you present a card it sends the card ID and presses enter. A little bit of JavaScript to capture this and it looks like magic.

Implementing this all in JavaScript worked way more easily than I expected and I'm really looking forward to using this in a game.

We were throwing away two prehistoric Compaq TC1100 Wintel slate PCs from work and I managed to grab them. With Ubuntu Mate installed they work just great, even the horrible stylus is functional. What's great about them is it stops me building a 'high tech terminal' prop as they look like one without really looking exactly like a conventional laptop.

The whole thing isn't 100% finished, I'd been burning the midnight oil a bit and when it got postponed I stopped. Once we've got a new date for the game I'll get back on the horse.

In the meantime though I presented at the London Arduino Meetup about some of my previous work.

There's a video of my full presentation here, but DON'T WATCH THIS IF YOU PLAN TO PLAY THE NEXT WAYWARD SONS GAME AS THERE ARE MASSIVE SPOILERS IN THE Q&A.

Presentation Spoiler: I say 'um' too much.

There are also some nice photos on the organiser's flickr feed.

Now I'm freed up to work on other things, we've got the season of Lasertag LARP ahead and I seem to have managed to break/kill several of my 'tag weapons. I think I'll be fixing these this weekend.
Posted: Saturday, July 16, 2016 No comments: