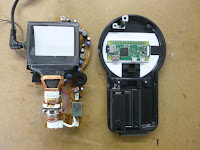 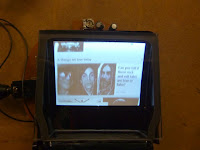 A friend called this a Chindōgu and I had to look the term up. He called it dead right.

For some time I've been meaning to fit a Raspberry Pi inside a vintage Sony CRT portable TV, making the chunkiest most impractical yet still portable Raspberry Pi. I've been spending all my time coding my mesh network and last weekend needed a break so this practical project called out to me.

Squeezing the Pi inside was comparatively easy. Bigger than the more common 'oblong' models, this FD-250B has a rounded case, offering a bit of space round the edges, bigger screen and an AV in socket on the side making connecting the Pi trivial. No hacking into the tuning circuit, I just desoldered the AV socket and connected the Pi composite output up.

I'm using a Raspberry Pi Zero W, which has no sound output by default so at the moment this is silent, but there's a way to generate sound by re-allocating some PWM pins and feeding it through a low-pass filter. I may get back to this later but need to be clear if I'm sticking with the Zero or upgrading to a 3A+ with the sockets desoldered, which would give me audio.

I'm trying to keep this externally as original looking as I can so it's still running off the four AA batteries and uses the original slide on/off switch, but repurposed to trigger a smart power switch so the Pi can shut down gracefully when you switch off.

At the moment the tuning wheel is completely removed and I plan to turn it into a rocker switch for scrolling up/down, selecting things etc.

You can just about use the GUI with a paired Bluetooth keyboard and mouse. Web browsing sucks, not just because of the screen size and distortion, but also because the Zero doesn't really have enough horsepower. Here's a little video of it in use.

After this I tried playing a couple of 4:3 video clips and it excels at this. Which is right and proper given its original intended purpose. Right now you have to start omxplayer manually from the command line, but I can see how a simple file browsing GUI, probably written in Pygame, could turn this into a decent super-retro media player.

I have plans beyond this though, I want to squeeze one of the tiny Pi cameras inside, perhaps where the tuning pointer was, and it's occurred to me I might be able to fit a resistive touchscreen if I replaced the round bezel. Which I would like to do anyway if I fit the camera. This is to remove all trace of the tuning pointer.
Posted: Sunday, February 03, 2019