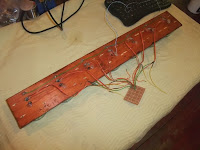 I've got seven servos in the time machine and this is too many to control directly from the Arduino with all the other stuff I'm using PWM for.

So I've bought a servo controller chip which connects serially and does all the work instead.

Tonight I started roughly wiring up a board for this, but kind of ran out of steam as I was getting very tired. Over the weekend I really need to get this finished off as it's one of the main things stopping me fixing the dials to body of the machine and finishing up that section.

the board will be based close to the servos to cut down the number of wires I need to connect back with, I should be able to reduce it from 21 to 4.
Posted: Wednesday, October 30, 2013 No comments:

Having fixed the short I got the flux capacitor and the various other PWM lighting circuits working. This was a good step forwards as so far I've been playing with it all in isolation rather than connected to the Arduino. 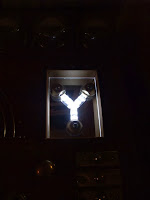 Tonight I wired up the MOSFET board and Arduino to the 12V supply in the time machine so I can start making it 'do stuff' independently from a computer.

With the the flux capacitor connected it looks awesome, exactly how I wanted it.

Unfortunately I seem to have managed to create a short in two of the three channels in use on the MOSFET board so they're always on.

I spent a little while last week coding a flux capacitor style quickening chase sequence with some LEDs on a breadboard ready for this moment. Sadly the short means it just kind of flickers a bit.

I've kind of run out of time this evening and have to be up early tomorrow so I'll come back to this later.

The static picture however does kind of show how it's coming along.
Posted: Friday, October 25, 2013 No comments: 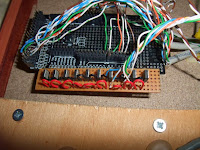 I need to run various things from the Arduino, many of them LEDs I would like to control with PWM.

This is OK straight from the board if you want one or two to mess about with. However I've got loads of LEDs to drive and the RGB strip I'm using for ambient lighting needs 12V.

So I've made myself up a little 10 way N-channel power MOSFET board to drive all this stuff. There's not a massive amount of power going through any of this, but it would be more than the Arduino should really source and well, I need 12V anyway not 5V.

Since adding the flux capacitor to the design I'm a short a couple of channels for all the stuff so need to order some more MOSFETs, but this gives me a great start as I can do most of the LED lighting.

I'm still not 100% sure if I'll use addressable RGB LEDs to light the dials at the back of the machine or just have them lit up white on a single channel. Doing this would make it simpler as I'd be using one method to control things. Also the addressable LEDs are bulky and have short leads between each one so don't actually reach from one dial to the next without doubling them up.
Posted: Friday, October 25, 2013 No comments:

Every time machine ought to have one 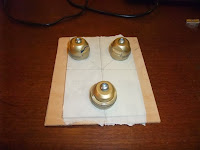 You can't have a time machine without a flux capacitor can you. I'd already cut a suitable hole to house it and tonight I quickly threw one together. 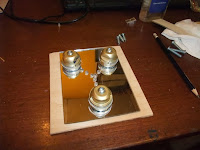 I am threatening to turn it into an infinity mirror so I've used a plastic mirror tile as the background.

It's not an attempt at an exact copy of the BttF flux capacitor. I just want it to be recognisable.

The holes are so I can make it light up. 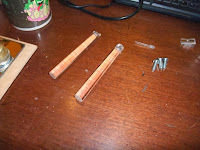 I was lucky to have these bits of acrylic rod kicking around in the cellar attached to an old printer stand. They work really nicely. 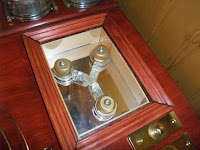 The final thing roughly held in place. At some point I have to struggle with the mirror film on the top glass. We've already tried it once and it came out a right mess.
Posted: Wednesday, October 16, 2013 No comments: 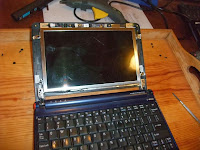 It had been on my mind for some time that if I am making props that rely on Arduinos, files on SD cards and so on I really need some way to tinker with these things in the field.

I don't own a laptop and while you can program Arduinos from Android using a quite nice app called ArduinoDroid, it's a bit fiddly and only supports some boards. Most notably it doesn't support the Mega, which I wish to use. 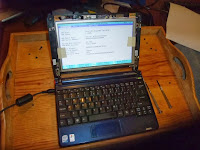 Buying a shiny new laptop for this would have been a gross extravagance but I was beginning to justify picking up a scruffy secondhand one to myself.

Then a friend asked me to dispose of an old Acer Aspire One netbook she had dropped a year or two ago, smashing the screen. She had finally pulled the interesting files from it using an external monitor I loaned her and wanted me to zap the disk. 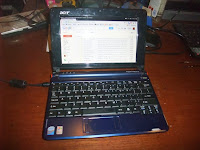 Not only did it need a screen, their dog had chewed up the PSU so it was kind of ready for the dump.

However I had  a PSU that suited in my work drawer and these Acers are basic but solidly functional so I wiped the disk, installed Ubuntu and used it with an external monitor for a couple of days to make sure it was passably stable.

Then it was off to eBay for a cheap replacement LCD panel.

Tonight I've fitted this and it was far easier than expected. All I needed was one jeweller's crosshead screwdriver, some care, patience and the foresight to lay it all out on the kitchen table on trays. The only casualty was a tiny bit of plastic clip from the screen bezel. On an old, pre-dropped netbook like this it might have been broken before I opened the case anyway.

Oddly, the Wifi didn't work with the screen broken but came on the first time I fired it up with the new screen. I can only think the screen was shorting out and grounding something that it shouldn't.

So I've now got a tool to work on things out and about for almost free, even if it did suck a little of my time. What I must not do is get tempted into a cycle of upgrades/accessories for this, it would be trivially easy to waste money on a small SSD, more memory, case and so on.
Posted: Monday, October 14, 2013 1 comment: 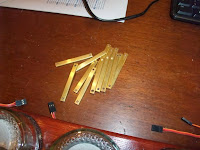 Working on the Time Machine dials I've wondered for some time how I'll hold the glass on.

I did plan to put brass strip across the front but it was looking a bit ungainly. Instead I cut the strip up and used it to press on the small lip round the bottom of each one. 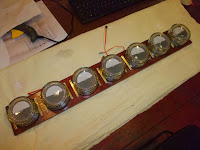 I'm quite pleased with how this has come out and it holds the glass really solidly.

Currently these are screwed down, but I think ideally I ought to drills some holes in the wood and use M3 bolts.
Posted: Wednesday, October 09, 2013 No comments: 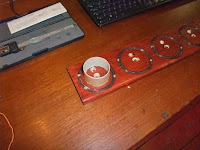 With seven servo driven dials to make and time to finish the machine disappearing rapidly, tonight I did a bit of production line bodgery.

As per usual I've done it mostly by eye and stuck it with hot glue but it seems to have come out pretty well. 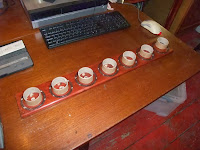 The dial faces are still the blank trial ones I did so I can just get on with the bulk of the work. Doing a nice design for the faces will have to wait.

If I get time tomorrow I'll make up the brass strips which will hold the glasses in place. 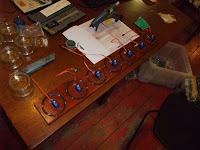 First though I must finish building this bit of the machine before I start coding. 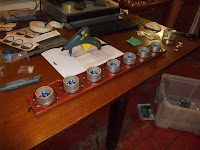 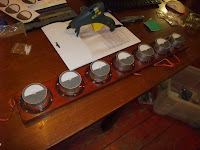 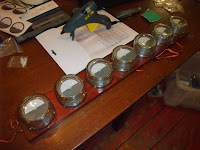