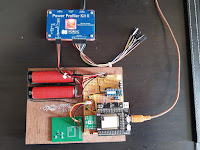 Prototype 5 sucked, trying to bodge in the ESP32-S2 breakout to the old board just didn't work well, so I did another prototype. Also as I now have the Nordic Semiconductor Power Profiler II, testing and measuring power use is so much easier and I could ditch the INA219 current sensors. These added a lot of mess to the previous prototypes.

As it's easy to adjust the voltage from the PPK2 it almost stands in as a dummy solar panel, although you can't current limit the output.

This latest prototype mostly came about because I designed a new schematic in EasyEDA, had a crisis of confidence about pin choice and how well it would work and resolved to just build it. Also it's Chinese New Year and I'm not in a hurry to order the boards.

I'm now absolutely set on using the ESP32-S2 for this project but I'll run this prototype off the panels for a few days and see how it behaves.

Update: I can't continue using the PAM2301 buck regulator I had intended to, testing showed it 'trips out' when panel voltage is ~6v. Which is fair enough given that's what's in the data sheet, but my expectation was charging load would keep voltage on a 5.5v panel below that, even though no-load voltage can be quite high. This is not true.