After a little fiddling around today I had software on ESP8285 node so I can keep track of the battery use and how well the MCP73871 manages things. 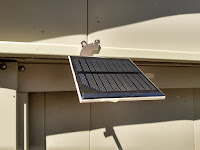 Working at my desk it seems to seamlessly charge then swap over to battery if needed, but more importantly if there's roughly 0.5W charging capacity, which is what I'm expecting from the solar panels I have, available it'll run the ESP8285 and use excess to top up the single 18650 I've fitted for now. This is exactly what I was hoping for from the chip, but what's not clear yet is how well it works around dawn and dusk. Playing around with my bench PSU would give me some idea but with solar cells varying voltage under load I've just gone straight for a practical test.

The code I've put on isn't anything like the final application but it does sit there connected to WiFi pushing data to MQTT every 30s so it's a pretty reasonable test. I'm dropping the output into a .csv file on my server and I'll look at it periodically to see how the battery fares. As I wanted real timestamps on the data I used the quite nice ezTime library to sync with NTP but more importantly maintain a usable time based off the ESP8285's internal clock and only periodically update it. This is a feature I will need when things happen for real, although I'll probably have to use GPS and a local NTP server due to lack of guaranteed internet access.

Also Blogger has changed and all my layouts are broken. Sigh.
Posted: Tuesday, May 05, 2020