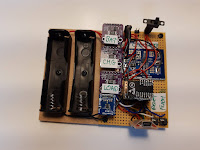 Putting a 'production' board together rekindled my interest in a solar charging prototype of my mesh network nodes.

A small solar cell in typical UK weather is not going to be able to run the node 100% of the daytime, but it will almost certainly work as a useful 'runtime extender'.

I started looking at this way back last autumn then like a lot of things my enthusiasm waned and it languished in a box for months. Today I finished off putting it together to a point where I could knock some software up and start logging charging/load data.

I'm using the same ESP8285 module I have for the nodes, with an MCP73871 development board for charging and power management. The naive approach would be to stick a conventional LiPo charger in parallel with the batteries but the load messes with the charging.

The MCP73871 manages the power path so that depending on the charging power available it will run the load from that while also charging the batteries, run the load from it, or once it it is too low run the load from the batteries. As the battery isn't directly connected to the load this can be done while maintaining proper charge behaviour for the LiPo. It is not proper MPPT tracking for the solar cell, but it does sensing of how much current it can draw before the voltage drops too low that will have a similar effect. For extra efficiency a DC-DC converter that does MPPT would help, but I'm going to suck it and see if this prototype is 'good enough'.

I've shoehorned several INA219 current/voltage sensors into the power path so I know the battery, charging and load detail. My plan is to stick this inside my shed, with a solar cell outside and simply log the data until it falls off the network because the MCP73871 has decided to protect the battery.
Posted: Tuesday, April 28, 2020