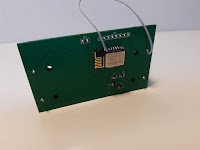 Back in February I was faced with a looming deadline for our LARP in March where we would be using my ESP-Now mesh network for messaging between props and also to end devices used by players.

For this to work we'd need some fixed nodes to give minimal coverage. I had previously built ten static nodes using Wemos D1 mini Pro boards and NiMH batteries and used them in testing but battery life was only around eight hours which wouldn't be enough even with overnight charging.

I did a few sums, came up with a power budget and figured something with a more efficient regulator, no indicator LEDs and a couple of 18650 cells in parallel should easily run for a whole weekend, eliminating another point of stress for the game.

Scratch building all this would have been a drag so I designed and ordered twenty boards from JLCPCB in China. 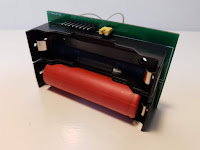 I had previously tried designing boards in KiCAD but found the interface impenetrable even for simple things and got deterred. For these boards I tried out JLCPCB's own web based EDA software, EasyEDA and was pleasantly surprised.

While I did have a bit of a struggle finding matching footprints for the components involved the process really wasn't hard. They also integrate this fairly tightly with the PCB ordering making the generation of gerber files, drill files and so on something you don't need to worry about too much.

This smoothing over of the complicated process meant I was able to get to grips with EasyEDA, design a board and order it in a morning with my only previous experience being a couple of failed attempts to do something useful in KiCAD.

Sadly with the postponement of our game due to the pandemic these boards have sat on the side since delivery but today I finally built one and it works! I added a reset switch to make repeated programming easier, and were I to design them again I would add a reset and flash button on the board, but for now these suffice. There's almost nothing to the circuit, it's an ESP8285 module, buck regulator, battery holders and some headers. No charging or protection circuit and nothing to leech power that isn't needed.

Until I add more features I have in mind like onboard solar charging then they'll do. In the meantime I'll do some current measurements and rundown tests with this one to check its performance. I'm really hoping these will give us the coverage we need for the game and now I've some more time to work on it I can actually check properly.