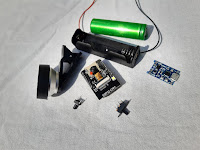 It's been a while since I've blogged. Back in March I was working very hard indeed on making props for our upcoming LARP. With the pandemic we suddenly had to postpone until some indeterminate time in the future.

This killed my enthusiasm for a bit and when I picked up projects again I needed a change. 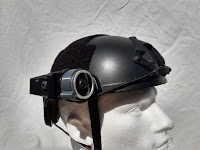 Over the last couple of weeks I've been fiddling with the ESP32-CAM board again and turned the pile of components in the first photo into a working helmet camera prototype.

With the standard camera example code loaded it works really quite solidly and the battery life with a 18650 cell recovered from an old laptop battery pack seems good. 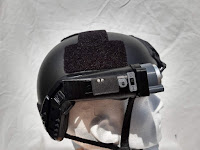 I started out with the selfie lens for aesthetic reasons but it does a good job of taking in a whole room as you move around, something the default lens these boards ship with doesn't do.

The tactile button on the side switches on the onboard 'flash' LED and there's an acrylic light pipe bringing the light out of the shadow of the lens. It's not a proper long throw torch but it just about manages to light a dark room so you can see and the camera will generate a very grainy picture with the gain up full.

Onboard charging is nice but currently getting the cell in/out in the field is impractically fiddly and the holder is stuck in with tape. The indicator LEDs on the TP4056 board are brought out on the side with another couple of light pipes and these work great. The idea is if these were issued on a multi-day game it would be the player responsibility to keep them charged and a USB charging socket makes that practical. For a short game they probably won't need charging.

Overall this has worked out really nicely and the design I've done in OpenSCAD is modular enough it's easy to swap out the rail mount and add something different. These could easily double as 'CCTV' cameras with a ball socket mount.

The design does need a little more work to make it easy to assemble but broadly it's there. I've also had it suggested that an external antenna would be acceptable, when I thought it would be too ugly. So I'll work on a version with that over the next few weeks, the boards have a uFL connector and it'll really help increase range.

I've got enough camera boards and recovered batteries in good condition to build a set for a whole team of 'marines' and a few static CCTV units. Doing this while keeping the cost down for 10+ units has been a major requirement of this project and I've definitely succeeded at that. The bill of materials using the recovered 18650s comes in at about £7 plus printer filament at the moment.
Posted: Thursday, April 16, 2020