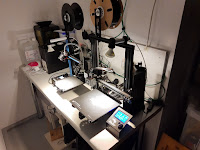 A while back I wired both my Creality 3D printers so that they are powered on and off through Octoprint. This is useful because I work two floors away from the printers and perhaps more importantly because it switches the printer off after a long print.

This has been working perfectly but I often have the light in my cellar switched off making the camera monitor pretty useless unless I go and switch the light on.

I figured it stood to reason that switching some lighting on with the printers was a good idea and I made up a couple of little spotlights attached to the printer frames and connected them to the same SSRs that switch the printer power.

The spotlights are made from some ceramic GU10 bulb holders I had, 20mm electrical conduit and some 3D printed parts I quickly knocked up in OpenSCAD. I knew from my work with making fittings for GU5.3 12v bulbs that heat from the bulb wouldn't be an issue with the printed parts, they barely get warm to the touch even after several hours.

I only did this yesterday but it's already meant I haven't been leaving the cellar light on as much while working on projects.
Posted: Monday, April 20, 2020