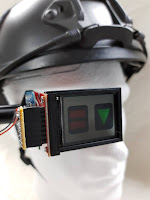 I spent a little time with my 3D printer and soldering iron to make this into a more practical testbed. 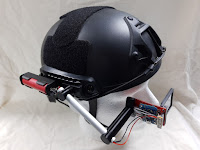 As I've been working on the project, it's become very clear to me that trying to hold the screen in front of an eye while testing it just doesn't work. You just can't hold it steady enough and you end up looking at the screen rather than 'through' it, because it's moving.

For the helmetcam project I've been making them to fit to a FAST helmet copy as they're a cheap standard piece of milsim-looking kit. So it made sense to do the same with the HUD. The bracket I've made sticks out too far to be safe walking around as you'd catch it on things, but it does a pretty good job of holding the screen in about the right place to work.

I did a little looking around with it fitted and I think I'm making good progress. You can see the image on the screen without it blocking your vision badly. It's blurred, because you're not focused on it but large icons and blocks are very recognisable.

However it doesn't work well enough yet, there are a few things that have obvious scope for improvement.

There are also some things I can't easily fix immediately, without buying another screen.
I'm going to continue to slowly chip away at this over time as I still think the idea has merit, especially when tied into the camera and other communications gear I have planned.
Posted: Monday, November 16, 2020