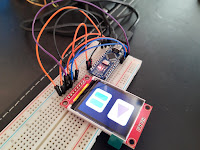 For some time I have fancied making a HUD (heads up display) of some kind, probably attached to a variant of the helmetcam project. Real HUDs or wearable displays that don't completely cover your face are hard, just look at how Google Glass didn't really take off. 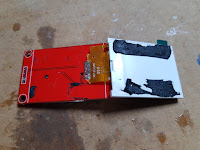 Nonetheless it's a sci-fi trope and I fancy a go at it. My vague plan is a transparent display you look through and don't focus on, a bit like some kinds of gunsight. It's not going to be able to show text, but it may work for blocky colour coded contextual information. 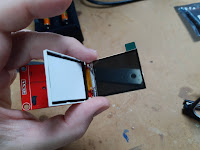 To have a stab at this I picked up a couple of cheap 1.8" ST3375S SPI displays, commonly sold for use in microcontroller projects like weather stations etc. They're very cheap and I bought two, in case I broke one. Having a second intact one to code on will be useful too. 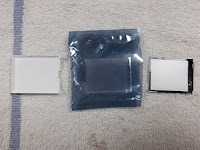 The first step is to peel the whole display from the PCB. It's simply held on with sticky foam pads and luckily on this specific board there are no components to be careful of, just the ribbon cable. A different module might not be the same though. I used a thin plastic scraper pushed slowly but firmly between the PCB and screen to remove it.

Once the screen is free from the PCB you need to separate it from the backlight. Luckily the white plastic surround is very thin and if you gently flex it this will unclip from the the screen.

The backlight is still attached to the ribbon cable so be careful not to rip it while you do this.

The LED backlight is inconvenient so I stripped it further. There are four parts, the white plastic surround, a thin piece of clear plastic film to spread the light, a thin white paper-like diffuser and the LEDs.

The first three parts are very lightly stuck together and you can carefully peel it apart until you're just left with the two backlight LEDs soldered directly on a section of the ribbon cable, which doesn't get in the way too much.

The bare screen is quite dark but when you hold it up to the light you can see the individual pixels which looks quite cool. 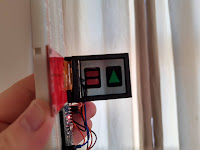 Once I'd got it to this point, I did a little measuring and 3D printed a surround to hold the screen safely while I tinkered. After an initial false start, I got the Adafruit ST3375S library example code driving the screen and as I'd hoped, big blocky images are quite legible while looking through the display.

The next step will be gluing a D1 mini to the PCB and point-to-point wiring it to the screen so I can play around with holding it in front of my face on a stick.

Without a backlight it's totally useless in anything but bright light. It may be possible to re-use the light spreading film and have the LEDs provide a little light on the display, for which I'll need to design a different surround for the screen.