Recycling an old laptop into a Command Centre: Part 2 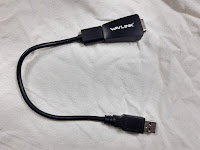 One of the things I want to do with this prop is have multiple screens. A primary one then the three small composite displays that used to be part of a video production setup.

With no way to slot extra display cards into a laptop, my first thought was to use a USB-VGA adaptor then a VGA-Composite convertor so I picked one up from Amazon for only £6. Even before purchase it was clear it would be a bit sucky over USB2, but that doesn't matter for a mostly text display. 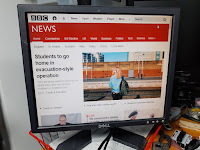 It arrived and actually I'm quite impressed with it. Yes it only does 800x600x8 over USB2 but it does work (at least in Windows) even if it's not going to be any use for things like video. I can actually see myself using this with my laptop (which has USB3) for an extra screen. The messy thing is that it's not well supported under Linux, seemingly needing extra kernel drivers that don't work in current kernels etc. at which point I got discouraged. It also looks like you can only use one. Maybe. I plugged it into an Ubuntu 20.04 box and couldn't get any life from it but resolved to fiddle around with the drivers in a few days. 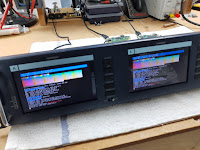 This got overtaken by serendipity when Hackaday reminded me of the existence of the PiGFX project, as used in the RC2014 retro computer. I'd not paid a lot of attention to it when it appeared as it just looked like a way to piggyback a Raspberry Pi Zero onto the board. Which it is, but I hadn't appreciated the software is a 'bare metal' kernel that stops it being a full Linux system and makes it into a 'dumb terminal' listening on the Pi UART and displaying on an HDMI or composite display. A quick play on my desk showed it looks the part, so I soldered up cables to the composite outputs of a couple of Zeroes and tried it with the small rackmount screens.

That's the hard part taken care of and while poking around the Pimoroni site ordering a Zero for the third screen I spotted 8086.net make a USB-UART shim specifically for them and they're cheap. This covers the other half of the job with a readymade board so once the parts show up I'll have three serial terminals connected to the laptop by USB.

There's a big overlap here with my work on creating a library for controlling this kind of terminal from a microcontroller, so coming up with code to drive them won't be new ground. It's a shame they're not full graphical displays but it will make them very easy to spit status info out to. If I need graphics I can go back to investigating the USB-VGA adapters.