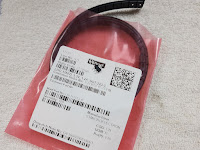 During my work on the helmet camera project, I found that I was having a few brownout issues and occasional flakiness. At some point I found out that the 'low dropout' 3.3V regulator used on the ESP32-CAM development boards has a minimum dropout of 1V. 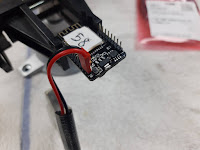 That's not a hugely uncommon minimum dropout but simple maths shows that a LiPo putting out a realistic 3.8-4.0V in use is not going to result in 3.3V supply to the board.

I put a multimeter on the Vout of the AMS1117 on an ESP32-CAM board and when in use for video streaming it was down around 2.9V.

In principle the datasheet says the ESP32 will operate at 2.3V but there are onboard 1.8V LDOs used to power PSRAM to take into account too. The datasheet recommends a 3.3V 500mA supply to the module unless you also provide separate 1.8V supply.

As it stands, the module is just not getting that from a 4.0V LiPo.

I had a look for a good solution but my component browsing failed until I was recommended the ST LDL1117S33R. It's pin-compatible with a minimum dropout of 350mV. They're not expensive parts so I took a gamble and ordered 100 as the AMS1117 seems to be the default LDO on many cheap development boards.

After a little bit of hot air rework on an ESP32-CAM to replace the LDO, I measured Vout in the same conditions and found a solid 3.25V.

While I don't know if this will help, it feels like it should improve stability under LiPo power and I know it will make a big difference to usable battery life. It has definitely cured the issue where the 'flash LED' on the ESP32-CAM would flicker while streaming and powered by a LiPo.

I may yet make a 'shield' for the ESP32-CAM that includes other components for the project and a buck convertor would be more efficient still but this is a good incremental improvement.