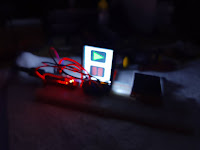 I had a go at fitting the light spreading film in the frame of the transparent screen. This is a really fiddly thing, it took several attempts to get the LEDs snug up to the film and everything in place.

The result is disappointing. In order to make the film spread the light well, it has a 'milled' surface. This means it makes the display less transparent as it blurs everything to more of an extent than I expected when you look through it. Then once lit, the milling creates a moiré pattern with the pixel grid of the display and makes the images look bad.

As you can see in this photo it does make the screen work in low light nicely but makes the display such that looking 'through' it is pretty poor. I'm going to abandon this idea.