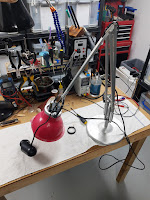 I found this lamp dumped in the street a couple of weeks ago and picked it up because it looked good quality. The last couple of days I decided to make a little project of repairing it, as I later spotted it was a genuine Anglepoise 1228.

There were a whole bunch of things wrong with the business end, including damage to the shade, but I 3D printed a new brim for it, fixed the bulb holder and electrics and gave it a general tidy. 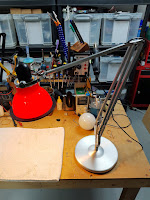 The main damage seemed to all stem from the bulb holder plastic being made brittle over time, perhaps with heat from an incandescent bulb. I know they're much less common nowadays but you do still see them in use. I have some stored I swap in when the strobing of LED or fluorescent bulbs causes a problem and I like the light they make.

All the parts of the bulb holder were there but the fixing points had crumbled or snapped. It could be held together but none of the screws had purchase any more. Careful use of epoxy glue allowed me to (quite permanently) get it into one solid piece again. I had to pull the socket terminals out and carefully feed the wires through from the rear then push the terminals back in as it could no longer be unscrewed to get the necessary access.

With this done, I looked at repairing the shade. It's really tough laminated plastic, white inside, coloured outside and I've no idea how somebody snapped a section of the rim. It feels like it would need a full adult weight standing on it to break. I considered trimming the rest of the brim but I know my limitations and it would never have been a neat job. So I designed a pair of rings with a lip that 'sandwich' the original rim and 3D printed them in a contrasting black. The odd coral pink colour of the shade wasn't to my taste so I gave it a little red paint and once dry epoxied the new rim in place.

Now it's all fixed up. I'm not short of lamps, but I hate waste and I'll find a place in my home for it as it's quite attractive.