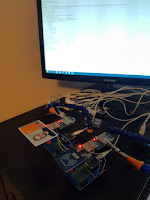 I may have bitten off more than I can chew, but let's see if this works out.

While I've been developing my ESP8266 mesh network library one of the demo applications I've written for it is an IRC-esque chat client with an ncurses terminal interface. It mostly works, but needs some polishing.

This application means you can connect an ESP8266 board into any computer that will run a terminal emulator and chat with other nodes with no infrastructure at all, not even local Wi-Fi. It's completely self-contained, an actual VT100 dumb terminal would work, for that matter, with a little level-shifting of the serial port.

When I went away to Odysseus LARP, they had a forum-esque system that had in-game use, for communication between players, with the GMs and as a source of information. This was an unexpectedly good experience adding to gameplay and was the basis of the in-game hacking mechanic.

For the sci-fi LARP I'm helping run in March while chatting during a writing session we decided to see if we could offer something similar. Odysseus was indoors with a big IT back-end, large player base and huge development team. Our event is mostly outdoors, about 20 players and three GMs plus a few more people helping with props, so tiny by comparison.

Nonetheless I've got a working chat application and want to use the mesh network for other stuff in the game already. Stick some chat nodes connected to laptops in the covered areas where there's power and you're getting there.

Key things I need to add are...


So I've spent a bunch of time this weekend messing around with using RFID cards as logon tokens, storing structured info in JSON files on SD cards, planning and thinking things through a lot.