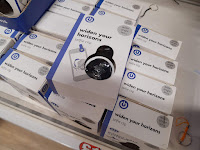 Poundland (the major UK 'dollar store') had selfie lenses for 50p so I picked up a few to play with on my stash of ESP32-CAM modules. 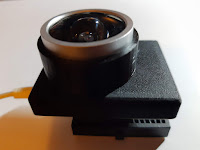 I've 3D printed a mount that protects the board and lines up the lens perfectly with the existing camera. The lens is an interference fit, at least on my printer, and screws in firmly.

Initial testing seems positive as it really expands the field of view. It's never going to rival a GoPro but makes the module much more versatile. You can buy a wide angle cameras for the ESP32-CAM but typically you have to buy that separately, almost doubling the cost so this was a cheaper way to get similar effect. 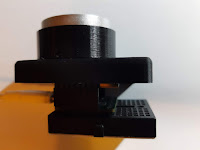 It also gives it a 'big lens' look rather than the pinhole camera of the usual module. Which is the aesthetic I want.

I still need to design a back to the case but this should give me a robust housing for these things. Different backs could have different options including a battery holder and switch.

The flash LED is exposed close to the lens but this would work better with a bit of acrylic rod acting as a light pipe and make it possible to make the whole thing passably waterproof with some thought.

The nasty thing with the LED is it shares a pin with the SD card interface so if you access the card it flashes. This is a problem. I have no idea who would have thought that was a good idea, it's not like there aren't any free pins. Fine if you use the camera over the network but makes the flash useless in situations you want to write to SD and if it's battery powered will chew power. Just why?
Posted: Tuesday, January 21, 2020