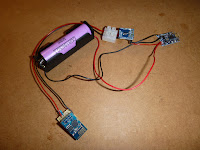 Having tried battery life with some Poundland NiMH AA cells I decided to give a LiPo a go.

I've a big pile of 18650 cells recovered from laptop batteries and in anticipation of trying this I bought a few of those ubiquitous TP4056 charger & protection boards as these cells don't have protection built in. Running down a LiPo below about 2.5v is a death sentence for it.

Running the ESP8266 straight off the cell wasn't an option this time either. The 4.2v from a fully charged LiPo is in principle enough to kill it. Having managed to run microcontrollers completely out of spec with no trouble before I expect 90% will survive just fine, at least for a while but if I'm ever to turn this into a completed project I wouldn't want to rely on that across a large number of devices. So I also stuck a little 3.3v regulator in line.

This made for a slightly untidy test rig, but it's functional.

As expected the LiPo lasted much better. I lost track of uptime as I reprogrammed it a few times while working on my code, but I got over 30 hours of constant running.

So I reckon 18650s are a great option for the wearable parts of the project I have in mind, even if they do add complication.

Update: I did this test again and got twenty seven hours runtime.
Posted: Monday, December 24, 2018