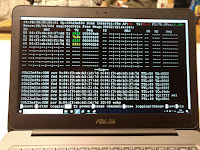 It was our end of year LARP social event this weekend which includes a little bit of shooting at each other in the woods with Lasertag guns, so I took advantage of this to do a field test of my code and hardware.

With the current sketch loaded onto the six nodes I originally built for testing PainlessMesh I headed off to Banbury. It's been a real success, with a couple of provisos.

First the good news. The range of five of the nodes was very solid, I could see direct ELP neighbour discovery packets from them using an ESP-01 plugged into my laptop inside a large wooden hut. This was just with the trace antenna. I think the sixth node has a fault where I've moved the link to connect the external antenna. This node had crappy connectivity despite being no further way from its neighbours than the others.

Secondly propagation of OGM packets works perfectly, I was getting packets forwarded from every node and the ESP-01 connected to my laptop looked to be making good routing decisions.

Finally I got almost eight hours runtime out of at least one of the nodes with nasty cheap pound shop NiMH AA batteries in the freezing cold and pouring rain. This bodes well for better batteries and my target is only to have 'all day' life from a set, fitting fresh at the start of each day. When I got home and opened the nodes they were all bone dry, despite my vague worry they'd leak at the antenna.

The big proviso is this was only a small site (42 acres) so I simply couldn't expect much in the way of a range test. I think I could have achieved coverage of this site with PainlessMesh.

The other proviso is I've now got eight hours of logs to wade through before I'm sure what I've just said is true. Mostly I was there to socialise so peering at a screen for hours wasn't going to happen.

I now have until March for the next field testing opportunity, unless I make a special trip somewhere.

In the meantime I need to make a device that actively uses the mesh so this isn't all just peering at MAC addresses and routing tables. Given my end goal is GPS tracking and status reporting I think it's time to build a minimal GPS tracker that reports back to a specific node.
Posted: Sunday, December 09, 2018