Squeezing a quart into a pint pot 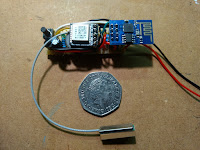 The first mainstream appearance of the ESP8266 was the ESP-01 board and it's a breadboard unfriendly horror.

It has eight pins and only two of those are nominally GPIO, but even these are compromised as they have to be pulled high to enable normal bootup. You pull GPIO0 low to program the board.

I've got twenty ESP-01s I want to use. Mostly because I've already got them but also because barring some weird ESP8255 packages they're about as small as these things get.

For my application I need a GPS module, Infrared receiver, pushbutton, status LED and piezo buzzer and I've achieved this with a little care over pin choice.

First with the GPS module the ESP only needs to receive data. In principle you can send commands to the module but I don't need to and that saves the TX pin, GPIO1. It's not often you see this referred to but it's just a variant on the usual Arduino Serial configuration...

Luckily the IR receiver is a pullup device, inverting the IR signal so that can be pretty safely connected to GPIO0. In the unlikely event you're unlucky enough to receive an IR pulse at the very moment you power the board on you'll notice as it has a startup sequence involving the buzzer and LED.

For the pushbutton I've combined it with the LED on GPIO2. The GPIO has a 10K pullup resistor, the button connects the GPIO to ground and I check for a low pin state. This is a very conventional setup for a button.

To double this up with the LED, it's connected in parallel with its cathode (normally connected to ground) connected to the GPIO and the anode to Vcc. If you push the switch then it connects the cathode to ground and the LED lights. However if you reconfigure the GPIO as an output and drive it low the LED also lights.

You can't use the button while the LED is lit but some simple logic swapping it from an input to output as needed works around this.

Which leaves the piezo buzzer but now that's enough free GPIOs to connect everything.

There's a lot of understandable negativity around ESP-01s in the community and I'm not sure I'd choose an ESP-01 afresh but you can use them in more than single use applications with some care.
Posted: Friday, January 04, 2019