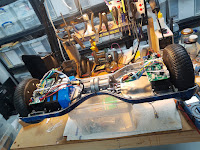 For absolutely ages I've fancied building a remote controlled rover that's got some physical heft and can handle rough ground. I've never really been into RC cars but a 'robot' is different.

This urge goes all the way back to the 90s when I was a fan of the TV show Robot Wars and at one point I got as far buying some big AGM batteries and wheelchair motors but like with a lot of projects my enthusiasm fizzled out. Part of this was because back when I was first looking at it this was an expensive hobby. Good quality speed controllers, good RC gear and access to the materials and machine tools needed to build something (unless you worked for an engineering company or University Engineering dept.) implied a level of investment in time and money I couldn't really do. I eventually became friends with some people who had competed in Robot Wars but I never built a 'robot' myself.

Now we live in quite a different world.

Electric vehicles of all sizes are now commonplace; from RC quadcopters to commuter scooters, electrically assisted bicycles, motorcycles and cars. Developments in battery technology, brushless motors and semiconductors haven't only been technical improvements but also the cost/performance improvements that come from massive scale manufacturing.

Also, all manner of hobby electronics and computing has become hugely more affordable and accessible. I'm an active member of a Hackspace with access to all the tools I could reasonably need to make something viable and I've a bunch more free time than I used to have, at least for now. 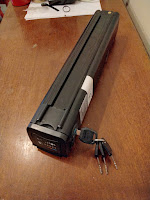 My recent trip to EMFCamp 2022 got me enthused again and while there I bought a 36v eBike 'Silvertail' battery pack as it's a well packaged large chunk of power with a built in battery management system. I've also dived in and bought some broken 'hoverboards' to play with. 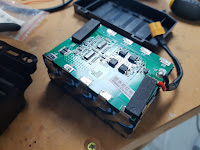 Naturally, Hackspace people got hold of these and tried to do things with them.
The motors are very high performance for the bargain bucket second hand price and come with everything you need to drive them, maybe even battery packs if you can replace any dead cells without setting fire to anything. Good speed controllers are still expensive but the ones in hoverboards are kind of adequate.

Lucy Rausch worked out how to replace the original firmware for the ubiquitous controllers in early hoverboards and a whole load of people built comedy vehicles with them. A bunch of Germans are very into converting the popular children's ride-on "Bobby Car" toys into absurdly nippy little vehicles.

I've bought two of these 'dead' hoverbaords and even had a go at reviving the battery packs. 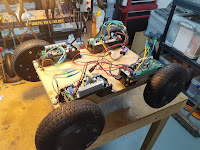 What could possibly go wrong?

There isn't a huge plan here. I just want to enjoy exploring how this works and as I'm coming at it after everybody else has already had a go there's plenty of information out there.

My minimum viable rover is just four hoverboard wheels, controllers and recovered battery pack screwed to a piece of plywood. This is not its final form, which may be six wheeled with rocker/bogie suspension in a vague Mars Rover homage. 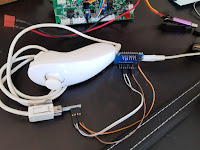 The whole project has a bit of a 'what people were playing with 5-10 years ago' thing going on. It's not unexpected as where possible I'm using stuff I already have kicking around in the cellar.

Lacking any RC gear I made my own 2.4Ghz remote using a Wii Nunchuck controller which were ubiquitous in Arduino projects a while back and a couple of ESP8266 microcontrollers sending ESP-Now packets.

I ended up reasonably happy with the resulting code and might publish it even though it overlaps a bit with other published projects. 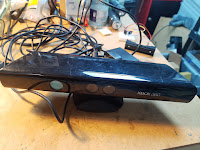 I'm also minded to play with a bit of collision avoidance and/or location mapping. Not to make the rover autonomous but to make it 'hard to crash into stuff'. This can advance separately from the chassis and basic remote control use. What was everybody enthusing about ten years ago that I had in a crate of junk?

It's old hat, doesn't work outdoors in direct sunlight and getting old enough that support in modern versions of Robot OS might have disappeared enough that I give up on the idea, but I do have one and it does work as I've tested it with a fresh compile of the open source libraries.

I know in my heart I'll have to buy a proper LIDAR sensor (which like almost everything else have become massively more affordable) but in the meantime I can tinker with this.

So how far have I got?

Not massively far but I do at least have one pair of wheels moving.

Since the original explosion of hoverboard hacking the controller hardware has changed and you can't use Lucy's firmware, but various people have adapted it to the controllers they've found in their hoverboards or even started again from scratch. 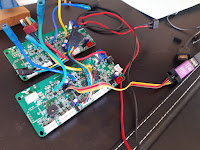 One of my scrap hoverboards had controllers supported by one of these firmware variants, the other didn't.

A bit of peering at markings on the microcontroller suggests I could probably reverse engineer the board rework the pinouts and make my own firmware variant but that's going to be time consuming. So I've ordered another pair of identical boards to the supported ones. This was about the same price as another dead hoverboard but you won't know which controllers are inside until you open them.

It does live though...