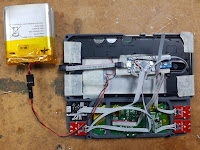 Quick? I don't think so.

With no immediate use for my Android Cyberdeck project it got shelved for almost a year but now I'm off to a LARP next month that is using the Discord app. for in-game communications.

So this came back out of storage and progressed somewhat. 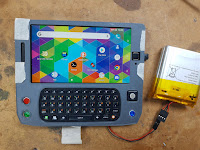 To make the XBox 360 chatpad and the little Pimoroni trackball work I've made a custom short flat USB OTG cable by cutting up one of the OTG adaptors I had (so it had the extra pin shorted) and mating it with a micro-USB plug scavenged from a cable. Yes you can buy these things but I'm not in the habit of making my own USB cables so I don't have the parts hanging around.

There's a small nub sticking out of the side of the current enclosure but it's getting cosmetic 'bumpers' I'll use to hide this.

The redesign for more buttons has gone OK. There are now three illuminated tactile buttons which I'm hoping I can make use of for dedicated forward/back as well as the usual click. I could almost do with some more because Android has a surprisingly pleasant mouse button interface that you don't normally experience because frankly how often do you connect a mouse to your phone? I might try and implement some buttons in the side that take the place of a mouse scroll wheel, but it'll be fiddly to physically mount them.
The huge battery in shot is just for testing it's far too big to work in the final thing, I think I'm going to order a replacement for the OEM battery as it's a perfect fit. Tucking the added electronics into that space was the original plan but a nicely fitted battery is more important.