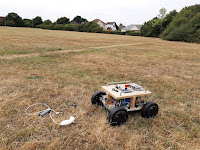 I finally took my rover down to East Essex Hackspace and drove it around a bit.

This showed it to be fairly easy to drive with the ESP-Now Nunchuck remote control and the range is more than I need for basic testing.

At its lowest speed setting the rover doesn't always make a lot of purchase on the uneven ground as it's prone to wheel spinning, but as it's 4WD it always makes some progress. This will be massively helped with some form of suspension.

Four wheels screwed to the corners of a piece of plywood is not an optimum chassis design once the surface is anything less than super smooth, but I knew this when I did it.

On the higher speed settings it digs in, gains momentum and flies about, rattling as it goes. The Kinect shook off of its 3D printed mount and I could hear the cable-tied Raspberry Pi rattling like mad so these things need securing in a significantly better way. I'm building up to stripping down the Kinect and making a custom enclosure of my own.

For the test I was using the 'best' of the three battery packs salvaged from the hoverboards and it lasted just fine.

There's not much else to say about this test but here's a little video I recorded.