Yet more messing about with the design but I think I've finally roughed out how the front panel layout will work. I think it'll look decent so I've quickly (ha!) printed one off to get a feel for what it's like in the hand.

Printing time is quite long, so iterating the design is slow even when broken down into separate modules. 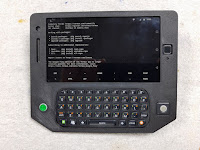 I've added a button on the left, which will do 'select', allowing you to use the trackball with one thumb and click with the other as push to click trackballs are always a bit awkward.

Generally it looks like things will fit easily. In fact I think I'll do a version with two buttons on the left and a third on the right. You almost want four buttons for Android though as you've got 'select', 'back', 'home' and 'task list' so this might force me back to using the trackball to select things. 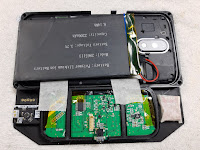 The battery shown might not be the one I finally use, it's quite old and was recovered from a dead tablet but finding something about the right size shouldn't be hard.The space in the rear of the phone where the original battery went is going to be used for the Arduino Leonardo that turns the keyboard, mouse and buttons into USB HID devices and assuming I continue with the original plan a TP4056 charging board.
I'll then use a little micro USB breakout to conveniently mount a charging socket on one of bottom corners, although with another couple of button breakouts this will be quite cramped. Were I going totally OTT there's actually space for one of the tiny USB hub boards I have, but I think then situating the external ports for plugging stuff into the device could be hard.
There is space for a Raspberry Pi Zero W, which might be an interesting addition but the phone is actually a more capable computer for any task that doesn't explicitly require a Linux system.

I'm also going to have to face up to the fact this 'quick' build won't be ready for the LARP this weekend. I could rush it and have a version made up but it's actually a bit too physically large to act as the 'covert portable terminal' that fits what the character needs. So I'm probably going to stick some spray paint on an old Sony Ericsson Xperia X10 mini pro, which is an ancient Android handset with slide out keyboard that will work just fine as that prop.