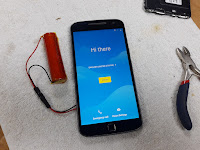 I have, for some time been nibbling at the idea of building a 'cyberdeck' prop for sci-fi LARP which is also a practical, usable device. There's been a ton of these built out of Raspberry Pi machines, but they're generally quite chunky to carry around and often seem to be display pieces more than anything.

The cheapest way to stick a fully featured computer with a screen in a prop is to re-use an old mobile phone and I happen to have a Motorola Moto G4+ which I replaced a few years back. It's still a very usable Android device and mostly I retired it due to charging/battery issues. 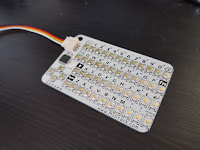 After soldering up a connector to the old battery tails it works fine with any old LiPo, within reason.

For it to not just be a phone in a case, it needs a keypad and other connections so I started messing around with an M5 Stack card keyboard I have.

The action is pretty nasty but I persevered and ended up with a 3D printable holder and levers to which I tried to add keycaps. 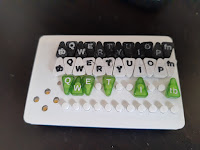 This does just about work but was still very disappointing and even with a lot of finishing work was always going to be nasty to use and probably not very robust.

The staggered triangular keycaps were a deliberate Blake's 7-esque choice that don't really work without a surround of some kind.

With a game that could benefit from me having a 'cyberdeck' happening in a week I dusted off the idea again and suddenly remembered I have some old Xbox360 chatpads in a box. 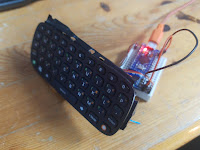 These were bought with similar ideas in mind several years ago and I've done nothing with them. These are significantly better than the M5 stack keyboard and are also illuminated in use.

Information on hacking these into other devices is generally very old and often a sea of dead/obsolete links, but I quickly found this video that gives you just enough information to make it work. The example Arduino sketch worked immediately which I call a win. 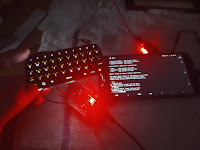 It's now been tried with the phone and in the dark the illumination works very nicely. That's the keyboard sorted, but I would also like to add the tiny I2C trackball I've got kicking around. Then it needs a case designing and printing. When I started down this road a couple of months ago I made a surround that holds the phone tightly so I just need to do the same for the keyboard and other gubbins.

After fitting the trackball there should still be some pins over on the Arduino. So I might wire them up to some LEDs for blinkenlights, or perhaps to have some extra buttons.