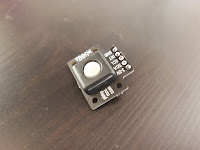 In the cyberdeck I would like to use this little RGB illuminated trackball sold by Pimoroni. There's python support, but no Arduino library support available.

So I wrote an Arduino library for it.

That's essentially a day wasted. The code isn't consequential but instead of smacking it straight into the spaghetti code I'm going to stick on the Arduino inside the cyberdeck case it's now a library with methods for things I don't need like the onboard LEDs.