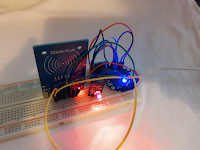 After going to Alone: Discord LARP I ended up chatting with the organisers on social media. They had some 'hackable locks' in the game that worked OK but were really just touching a couple of pads with a wire to make a beep and change an LED.

There were several game organisers playing and chat turned to making a generic 'hackable lock' for modern/sci-fi LARPs. It's something lots of LARPs will have needed or reinvented over the years. We might use them ourselves in March.

So I'm now smashing away at code for a generic lock prop based around the old favourite of an RC522 RFID reader, WeMOS D1 mini, LEDs and a piezo sounder.

The plan is to totally open source everything, with a build guide, 3D printed case, software that is pretty flexible and can be tweaked to behave in different ways.

This has already spawned two Arduino libraries. A tap code library for taking input codes on a single button (for hacking/admin) and an RFID authorisation library. The big plan is for a Web Portal interface, probably using ESPUI again.

Churning out some libraries means the main chunk of code for the prop is much less spaghetti-like and the libraries should be eminently re-usable. I really need to do this with lots of other things I've made or started to make.
Oh and obviously the Cyberdeck prop is on hold again, with no game to use it at for a while.
Posted: Monday, November 22, 2021