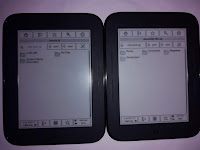 A long time ago my brother and I were gifted a pair of Nook Simple Touch e-readers but eventually Barnes and Noble abandoned the UK market and they ended up as drawer cluttering e-waste.

However they are actually quite interesting devices and a small community has built up around modding them so they can be used more freely. They're very low power Android tablets with Wi-Fi, an excellent e-ink touchscreen and five usable buttons round the edge.

So I dragged them out of the drawer and went through a tutorial I found to see how they behaved.

Once rooted and with the new launcher installed they work just fine and I found a few more tips online to make them more usable. No, I've no idea what they'll get used for yet but they can run things like the SSH client ConnectBot if you pick an old APK.

Supposedly with the new kernel I've uploaded which will make plugging in a keyboard etc. possible so they might make for an interesting low power terminal. They don't have the CPU or RAM to run a modern web browser, but the one on there is OK for minimalist web apps.
Posted: Monday, October 28, 2019