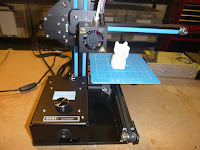 I finally got my Ender 2 3D printer fixed. As I'd diagnosed, there was a near short in the heater cartridge and I've now done my first test print after replacing it, which came out perfectly. Absolutely no fancy tuning, just level the bed with the thumbscrews and a piece of paper then press print on the test file on the supplied SD card. 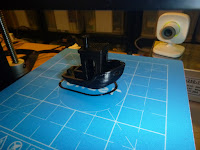 There are a few surface blobs but for a zero effort test print I couldn't have asked for more. Definition on the Chinese characters is excellent. I also lined up a Benchy and it came out pretty well but it did take a while to print so wasn't any kind of speed test.

This little £100 printer is so impressive, it seems a shame they aren't widely sold any longer. I know the Ender 3 is nominally upgraded but the Ender 2 is already a sufficiently good 'first 3D printer'.

I can see myself using this a whole load, as my Ormerod is still sadly kind of unreliable.

The Ender 2 prints from an SD card, but I'm used to having remote control and monitoring of my printers over the network. To fill the gap I've set up Octoprint to drive the printer directly from a Raspberry Pi, doing away with the need for SD cards.

Octoprint is widely used and I've worked with it on the Hackspace 3D printers before but as my other printers have network interfaces this is the first time I've used it in my own workshop. The fact it adds support for a USB camera to observe printing is a nice extra. I used to do that with a standalone camera setup on the Ormerod. For a slicer for the Ender 2 I'm using Cura as that's well integrated with OctoPrint. By adding a Cura plugin you can send files directly to the printer and monitor progress, including getting a a nice view from the camera.

The external PSU, Raspberry Pi and so on makes for a slightly untidy setup so I will make myself a little stand base to put the extra clutter in.

Oh and it makes the proper 3D printer sing-song stepper driver noise. Ever since I upgraded my Ormerod to a Duet 3D with Trinamic drivers it's near silent and I'd missed the noise.

Just listen to it...