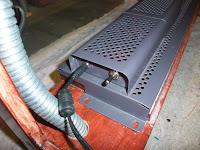 With the time machine I'm making a pretty fiddly complicated prop with loads of stuff to go wrong.

I'm being really careful wiring it all up and sealing it in place so that things can't come loose or get snagged easily.

However there's a real possibility that it will go wrong and die or just malfunction badly. Equally the batteries may simply not last as long as I'd like.

So I've built in a connector for an external 12V PSU and a 'safe mode' switch. Flick it one way and everything is powered up via the Arduino and driven by the controls/sensors. Flick it the other way and it just supplies power to the plasma globe and under desk lighting using the dumb controller the LED strips came with.

This is already working so if I can't make the progress I would like over the next few weeks we'll have a prop that does something.