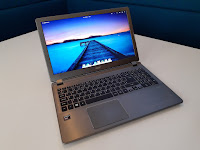 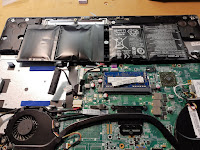 I make no apologies for being a Windows desktop user in a very Linux heavy community. For all the "Linux is better" sentiment I've always struggled to deal with its deficiencies as a desktop OS.

However I decided to make a foray into using it more on the desktop as I feel 'daily driver' use of Linux is a gap in my experience. A lot of this was prompted by recent versions of Elementary OS looking like a good candidate with a 'curated' app store from which things are supposedly going to 'just work'. Some are even paid for, at the sort of price you see on mobile apps, ie. 1-5$.

I'd thought about sticking Elementary alongside my desktop install, and even went as far as clearing the space on the SSD but then a 'free' laptop appeared at work. A colleague brought it in to go into our WEEE recycling but I snapped it up, much to the amusement of my team.

The machine is an old Acer V5-552 (quad core AMD A10 and 6GB RAM) which would have been pretty decent in its day but what I had in my hands was filthy, covered in cruft and greasy marks and had no HDD as that was taken out and smashed after failing.

It also transpired they didn't have the PSU, all the screws were missing from the base when they'd dismantled it and they'd set a BIOS password they couldn't remember. I had a little look under the base cover and found that it also had a nastily failing battery that I wouldn't consider safe to charge.

So yes it's a 'free' laptop but to most people a basket case and I sort of see that as a challenge. I hate stuff getting thrown out and I've wanted a 'disposable' laptop for a while.

Over the next few days I transformed it from trash to treasure for about £40.


Despite being nominally worse than my Zenbook by most criteria I really like it to use, mostly I think because I like the screen, keyboard and feeling of solidity. It's also not short of connectivity with a wired Ethernet, full size HDMI and so on. The performance is good as Elementary is quite lightweight and the quad core A10 is still acceptable for light use.

After a few days with Elementary I've found that the curated apps are relatively rare and you resort to installing generic Debian versions of most things. There are a few bugs to do with the way Elementary is skinned, notably some apps end up with a double title bar and you need to manually edit the shortcuts to fix this (edit the shortcuts in /usr/share/applications and add env GTK_CSD=0 to the Exec= line). Also Dropbox works but took some fighting to install and doesn't integrate with the desktop at all.

Sadly though Bluetooth mouse support is execrable, they work for a bit then fail and kill the ability to click with the pointer on some elements and the Bluetooth status app (sometimes the whole status bar). I can live with the appearance gremlins but that's really poor for a 'curated' distro and is the kind of thing that reminds me why I've given up on Linux desktops before. I need a mouse for working with KiCAD, which is one of the things I'm learning, and I can see myself falling back to carrying a wired mouse around. Irritating, but I'll persevere as otherwise it's working nicely.
Posted: Thursday, December 19, 2019