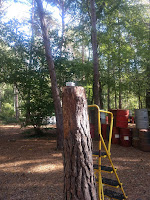 Yesterday I had a go at testing six painlessMesh nodes in a similar situation to the one I need them for. As per usual this is for a LARP prop and we almost exclusively play outdoors in heavily wooded areas. As I discovered with the last networked thing I made, trees are very good at blocking Wi-Fi so you really need to do testing out in the woods.

For this test I invested a chunk of effort into building these nodes fairly robustly into the IP55 box you can see in my first post about them. 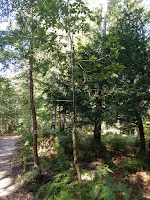 Testing based off almost finalised builds has a risk of being a dead end where you've wasted that time in making them almost complete. However if you're going to put them up in the air on poles spread across a wood
and you can't guarantee it won't rain, they need to be robust and vaguely weatherproof.

Putting them on poles was an attempt to make them inconspicuous to passers by but more importantly to stop the signal being blocked by low level obstacles. I had several sectional aluminium poles that allowed me to get the nodes out of eyeline without being so high they were in the canopy of the taller trees. You really don't notice the ones on poles wandering about and I lost one a couple of times before I made the sensible decision to take waypoints with my phone.

After a little experimentation with node placement I got a corridor along the main play area of our game covered. Once the full mesh was up I was able to send packets across painlessMesh from one end to another. So six nodes isn't enough for what I want to do but now I've seen how it scales I know it can be done without getting overly expensive.

I have ordered another six Wemos D1 mini Pro which should allow me to cover as much of this site as I need. My plan for these nodes is to cover a 'corridor' up the middle of the site linking the key locations, but as this is a mesh, once you add in the nodes carried by players and crew it should only get better.

Node placement was done with the useful behaviour of one of the painlessMesh example programs, where it flashes an LED counting out the size of the mesh, like in the video below. I chopped this example code around a little to include an activity LED and remove the 'hello world' stuff but as these nodes exist just to be part of the mesh the code is essentially done now.


The easily visible node count means you can extend coverage by walking away from the last node and when the count drops back to one, just retrace your steps until it rejoins. This gave me a mostly stable mesh really easily without tons of planning or having to consult a screen.

I'm going back to the site again in October and I plan to have at least ten nodes ready by then, mostly limited by having run out of the nice IP55 boxes I got cheaply from Maplin when they were closing down.
Posted: Sunday, September 30, 2018