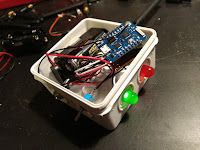 I should blog more, I have been doing stuff, honest.

Anyway I have plans for more mesh networked, location aware stuff. While I am going to try and sort out the Tilda EMF badges I have, the proprietary Ciseco radio tech in them is obsolete. It's great but I can't buy any more so need a new, cheap, way to put things together. Then maybe bridge the two technologies together.

Going back to the time when I was using the Ciseco radios, Wi-Fi on microcontrollers was a pain and expensive. Then the ESP8266 arrived and changed that. It's now cheap as chips and a very mature platform for tinkering with. Wi-Fi has loads of downsides for the sort of things I want to do but it is ubiquitous. So I'm going to do some evaluation of it as a basis for my next project of this sort.

I've settled on using the painlessMesh Arduino library to do the lifting for me and have just built a test node comprising of a WeMos D1 mini Pro with external antenna in a waterproof box along with battery, charging connector and some indicator lights.

You can configure painlessMesh nodes as being 'static' so they are more likely to be a hub in the mesh and my plan is to have a few boxes like this to help keep the wearable nodes in touch.

The painlessMesh API also includes some nice functions for finding out what nodes there are and how they're connected so I aim to build a tool that prints that out allowing me to check how well connected the mesh is and also 'ping' things to check them.

If ESP8266/32 and painlessMesh doesn't stack up I'll try LoRa, which should be better suited in some ways. However LoRaWan means playing nicely with the standard for gateways and this is very limited in bandwidth and talk time etc. Using just dumb broadcast LoRa radios would be antisocial to any nearby LoRaWAN and mean writing my own mesh network code. Again.
Posted: Friday, September 14, 2018