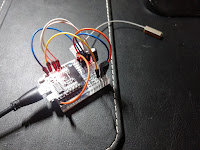 I've spent the last week or so messing about with painlessMesh and it's been a mostly straightforward exercise.

As this is all based around microcontrollers, building any kind of monolithic device with multiple roles requires careful thought so I've stuck with an ecosystem of simple single purpose things.

The idea is also that if these are spread around in use then it extends the mesh, instead of having some central server everything speaks to, too far away to be reached.

The main one is pictured here, it's a combination Lasertag sensor & GPS tracker. OK that's two functions but the whole point of what I'm doing is for this thing to be usable. I need to know where people are and what state they're in.

I've also chucked together the following...


All this has been chattering away quite happily but I've got a few minor issues...

None of this seems at all insurmountable, compared to writing my own mesh network library (again) so I'm sticking with painlessMesh for this project.

Going forward I really need to do some range testing of this and I've got a week to get ready for that.

Depending on how much range I get then I may need to do 'caching' of status messages to presently unreachable nodes. So as things move around they get delivered when they come into range. This is not a feature of painlessMesh so I'd be layering it on top, probably using the SPIFFS filesystem on the ESP8266 as storage if there's not enough free memory. Given these nodes will be attached to people moving around it'd basically be automated sneakernet.

I'm still using human readable, verbose messaging but that may have to go. Or perhaps send semi-readable codes with numeric values encoded as hex. Doing a load of parsing of things like latitude and longitude to/from readable strings, something that's kind of trivial on real computers, starts to chip away at available resource when playing with microcontrollers, especially if you want to buffer these up and store them for later delivery. When I wrote my mesh network for Ciseco xRF radios I agonised over whether to use 12 or 16 byte packets and settled on 12.