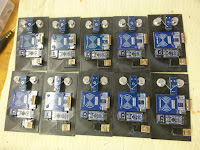 Producing lots of the same thing has been this week's task.

I spent a load of time messing around designing a 3D printed enclosure but kind of ended up with a box when my more ambitious design didn't really work. Still there are little pegs and clips to hold the modules loosely, which I've then fixed in place with some hot glue.

What I've got in each unit is a ESP-01 Wifi module, Arduino Pro Mini, MFRC522 RFID reader/writer, LDO regulator, Piezo sounder and a couple of big bright 10mm LEDs.

All of this is tested and working together with proof of concept code. Tomorrow I solder up the wiring looms.

Once I've done these ten, I've got another batch of similar, but slightly different stuff to design an enclosure for and assemble. I've learned a bunch of lessons while making this enclosure so it should take me much less time.
Posted: Thursday, May 12, 2016