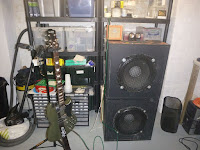 Next month I'm in a LARP where several of us are playing the members of a heavy metal band. We're going to try to bring instruments and make a little noise before whatever befalls us happens. It's a horror LARP and we all expect to get chased by monsters and die because the band will be unarmed and useless. That doesn't mean we're going to do things by halves though. There will be corpse paint, long wigs and lots of black clothing, at least for me.

Way back when I used to play with guitars and do lots of messing around with them I made this fake 'stack'. It's driven by Smokey battery amps and even has two 'channels' on account of using the normal and high gain versions with a switch to choose which one is in the circuit.

The cabinets are built out of old chipboard shelving painted black and the speakers are 12" drivers of unknown make that I pulled from a pile of rubbish at work.

Being a one-off joke made in a weekend it's languished unloved in my cellar ever since, but today with a good clean off and fresh batteries it still rocks. I may touch the paint up a bit but that's all the work it needs.

With the little Orange amp driving one cabinet two of us get to make a noise. \m/
Posted: Sunday, May 08, 2016