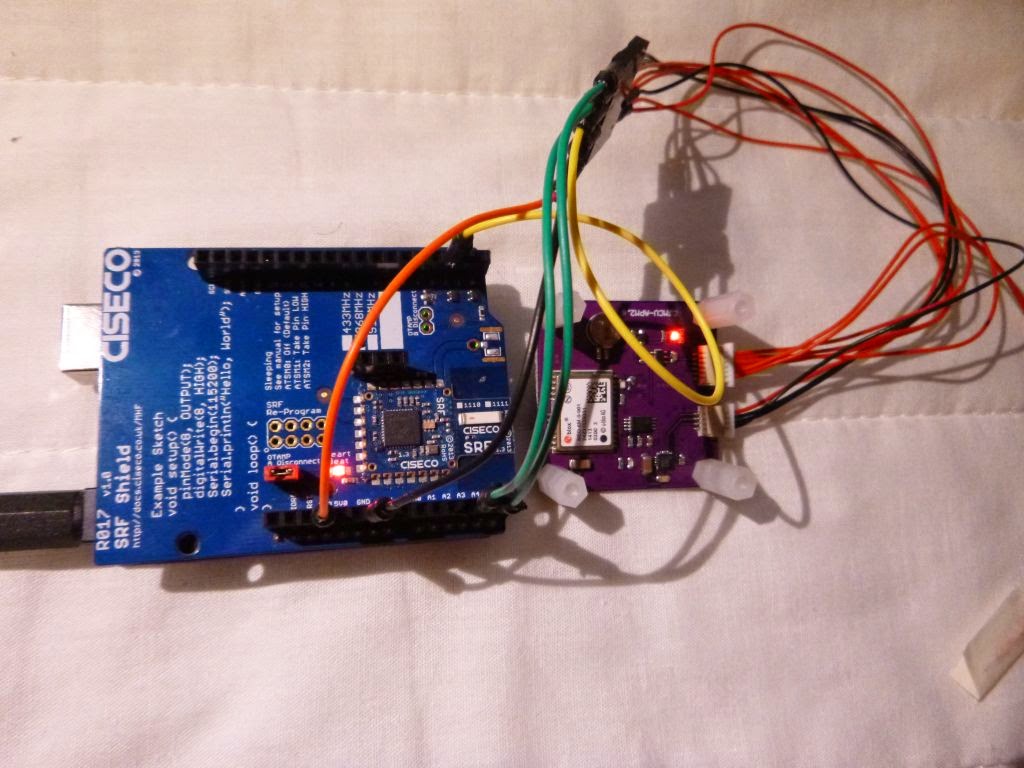 I find it kind of odd that on the weekend of his death I have spent a fair chunk of it pottering about with something called LLAP.

One of the things I want to get on top of this year is a set of location aware props. The plan is for Spookytron 2 to be wireless and location aware, plus later on I want to build a 'scanner' that can find things, either by having active 'tags' or waypoints.

To this end I have bought a couple of cheap GPS/magnetometer modules from eBay, the sort intended for fitting to a drone. These have a u-blox Neo-6M GPS and HMC5883L magnetometer combined on one board. They're not really integrated in any way, just two things on the same board. You have to power them separately and it even suffers from the GPS having a regulator so it's 5V tolerant while the magnetometer doesn't from what I can see.

After a little looking around to find the pinouts, which aren't widely mentioned, and a play with the examples for the TinyGPS and HMC5883L libraries it all went together very easily.

When I was working with LLAP to trigger sounds on another board it was very simple, send a message and deal with it. However, having to constantly process the NMEA feed from the GPS to get a fix showed things to be more fiddly than I'd like.

The Arduino SoftwareSerial library you have to use because the hardware one is connected to the SRF radio has to do a fair bit of work in the background. So it needs the buffer emptying all the time otherwise it drops characters and sentences of GPS data get corrupted. In fact it seems to struggle a bit even when not much else is going on, I need to investigate why as I don't think this should be the case.

The other difficulty I've had is that the LLAP library issued by Ciseco is not only still quite limited in function, it also seems to play poorly with TinyGPS. They say it's in beta but there's sadly no sign of active development.

The library is implemented using the SerialEvent routine, which is kind of like an interrupt in that it is triggered only if there's serial data to be read. However it happens at the end of the main loop, not when the event occurs.

The standard examples for TinyGPS have you slurping as much NMEA data as you can in one go to avoid missing data in the main loop. Then at the end LLAP slurps however much it feels like and faffs around with it. It should only be 12 characters in each packet but it still seems to faff a bit.

This adds up to LLAP messages getting missed (a lot) and GPS data getting corrupted (a bit) as one thing then the other blocks. I'm going to have to do a bunch of messing around to make it so all this blocks as little as possible.

TinyGPS will play nicely with this, but I can see the LLAP library will need a full makeover. Given none of the functions for two way communication seem to be implemented, you can send messages but won't see acknowledgements or responses, I can see me rewriting the whole thing.

Or ditch LLAP altogether, the 12 byte packet is already shown to be an issue for sending GPS data as you only have 9 characters to play with. Once I start having to code a way for floating point numbers to be fragmented or encoded before being pushed around the yak shaving will be in full swing.
Posted: Sunday, March 01, 2015