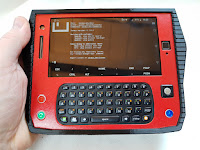 Some nine months after I started this 'quick' build it's done.

Nothing unexpected slowed me down really, but the level of accuracy needed in modelling the 3D printed enclosure ate lots and lots of time and test prints. I also faffed with not finalising how the charging would be done and having to swap from USB OTG host to USB charging and this led to reprints of the back section of the case.

There's now a slide switch on the bottom that swaps from charging to enabling USB OTG next to the USB socket.

Painting 3D prints is horrible and I hate it. I don't know how cosplay people deal with all the faff. I guess them shifting heavily to resin printers even on things without masses of detail tells you everything you need to know about how awful finishing FDM 3D printed stuff is. The final result on the top fascia is great but I really can't justify it on most of my one-use props. The back didn't come out as well but you're not looking at the back much. 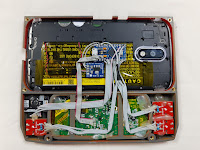 The device is obviously a massive inefficient use of space compared to the phone I built this around but that would be missing the point.

I've also decided that there's room inside this one for an RFM95 LORA module to make a LORA messenger, which would be quite cool but it'll have to wait until I've got time to make a second iteration of this. I'd also like to fit a USB hub and the option to plug in USB flash drives etc. A full size USB socket is quite chonky but there might be scope to squeeze one in.

I'm assisting running a Cyberpunk LARP in a month or so and wondering about reworking the 'cyberdecks' I made for the previous instalment of the game. They are just big 3D printed carry cases for Nexus 9 tablets which I've settled on as my standard "issue a tablet to LARP players" tablet because they're cheap and decent.

The game semi-requires of attaching stuff to the 'cyberdecks' with USB OTG cable at one point and once you start down that road adding random buttons and a keypad gets very tempting.